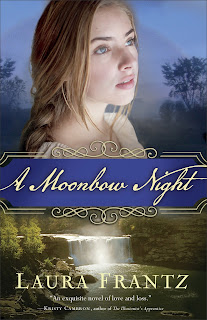 Her wilderness survival skills are without rival.
But her greatest talent is keeping other people's secrets.

After fleeing Virginia, Temperance Tucker and her family established an inn along the Shawnee River. It's a welcome way station for settlers and frontiersmen traveling through the wild Cumberland region of Kentucke--men like Sion Morgan, a Virginia surveyor who arrives at the inn with his crew, looking for an experienced guide.

Though he balks when Tempe is appointed to lead his team through the wilderness, it isn't long before Sion must admit that her abilities may outmatch his own. But can the tenuous tie they are forming survive the dangers waiting just around the bend?

With her signature sweeping style and ability to bring the distant past to vivid life, Laura Frantz beckons you to join her in a land of Indian ambushes, conflicting loyalties, and a tentative love that meanders like a cool mountain stream. 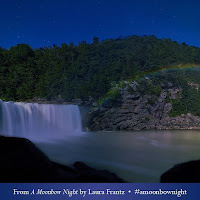 There is an impalpable quality that makes A Moonbow Night stand out in the field of historical fiction. Characters and setting are imbued with life and breath, living on in my mind long after the last page is turned. Words on the printed page literally become an artist’s paintbrush in the capable hands of Laura Frantz. Hooked from the first page, I want to read quickly as the story builds, yet the exquisite prose and descriptive passages demand that I linger to savor all that my senses are experiencing.

The Kentucky wilderness of 1877 becomes a major character – rugged and beautiful at the same time, yet difficult “to master or make peace with.” Laura is one of the best at submerging you into her world, utilizing all the senses. I came away with a greater understanding and deeper appreciation for America’s frontier men and women. 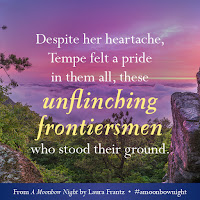 Sion and Tempe share qualities of strength and determination, and both have erected emotional walls because of a painful past. Sion “had that same air of intense quietness, that inbred strength and stealth that marked an able woodsman.” Tempe embodies what I think of as a frontier heroine – strong, hardworking, brave, and with an intimate knowledge of the rugged wilderness. The Moonbow Inn – a place of respite along the Shawnee river – is run by Tempe, her lame brother, (supposedly) widowed mother, and a serving girl. Gazing at the lights shining through its shuttered windows one evening, Sion realized “he’d forgotten what it was like to feel a bond, kinship. To come home. To be greeted, open-armed and openhearted . . .”

Like all of Laura’s books, A Moonbow Night is rich in historical detail and character complexity, but this story also has a spellbinding and ethereal feel. One of my favorite scenes was when Tempe and the half white/half Cherkee Raven shared a moonbow experience at the falls...

The moonbow spanned the river in a gentle arc, its ends resting on far limestone banks, the sight most vivid against the froth of the falls. As if it were a seam of brightly colored clay the Indians used for war paint, Tempe could make out rich red hues that melded to a fetching bluish purple and then pale green, the very green of the river itself.

Sion’s initial lack of faith stands in sharp contrast to the strong faith of his friend, Nate – and the effect of Tempe’s steady witness as the story unfolds is moving. The moonbow leaves an unforgettable impression, God’s faithful reminder “that even on the darkest nights there was a glimmer of hope, of promise, however hazy.”

A Moonbow Night is the first book to go on my 2017 “best of the best” list. Highly recommended.

Laura Frantz is a Christy Award finalist and the author of several books, including The Frontiersman's Daughter, Courting Morrow Little, The Colonel's Lady, The Mistress of Tall Acre, and the Ballantyne Legacy series. She lives and writes in a log cabin in the heart of Kentucky.