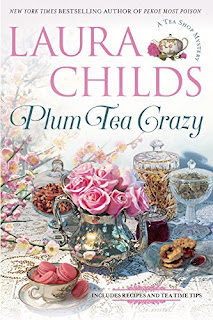 While viewing the harbor’s Gaslights and Galleons Parade from the widow’s walk of Timothy Neville’s Charleston mansion, local banker Carson Lanier seemingly tumbles over a narrow railing, then plunges three stories to his death. But a tragic accident becomes something much more sinister when it’s discovered that the victim was first shot with a bolt from a crossbow.

At the request of the mansion owner, Theodosia investigates the tragedy and is soon neck deep in suspects. An almost ex-wife, a coworker, a real estate partner–all had motives for killing the luckless banker, but one resorted to murder to settle accounts.

To see the nineteenth book in a series published … what a credit to the creative writing of Laura Childs! I came late to the tea shop mysteries, having only read the last two or three, but became an instant fan. This is my favorite series of all that Childs writes and each book can stand alone, but it is so great to visit with old friends Theodosia, Haley, and Drayton in Plum Tea Crazy. And kudos to the design team for creating such an attractive cover!

I love all things southern, so the Charleston setting that Childs conveys so well is one of my favorite parts. This story is filled with delightful charm and gentle humor – along with the sights, sounds and tastes of the city. Theodosia is a warm, caring lead character who solves some great murder mysteries.

Secondary characters add lots of interest. In fact, Timothy Neville is the catalyst for getting Theodosia involved, and he’s quite a character himself … “the octogenarian director of the Heritage Society, a multimillionaire, and old guard Charlestonite.” And Delaine is back in full force, a little rough around the edges, to say the least. According to Drayton, “she was one of those women that most men – and some women, too – considered difficult. Which, of course, was code for crazy as a loon.”

Theodosia’s method is different from many protagonists who solve the murder by slowly gathering evidence as they chat with characters, listening and observing. But Theodosia kind of runs from one character or social event to another, making wrong assumptions and keeping readers totally off track, which is what makes this story unique and enjoyable. I didn’t really try to figure out the murderer’s identity and just enjoyed going along for the fun ride.

I thoroughly enjoyed Plum Tea Crazy and hope this series keeps on going. Recommended to all cozy mystery fans.

Laura Childs is the New York Times bestselling author of the Tea Shop Mysteries, Scrapbook Mysteries, and Cackleberry Club Mysteries. In her previous life she was CEO/Creative Director of her own marketing firm and authored several screenplays. She is married to a professor of Chinese art history, loves to travel, rides horses, enjoys fundraising for various non-profits, and has two Chinese Shar-Pei dogs.

Laura specializes in cozy mysteries that have the pace of a thriller (a thrillzy!) Her three series are:

The Tea Shop Mysteries – set in the historic district of Charleston and featuring Theodosia Browning, owner of the Indigo Tea Shop. Theodosia is a savvy entrepreneur, and pet mom to service dog Earl Grey. She’s also an intelligent, focused amateur sleuth who doesn’t rely on coincidences or inept police work to solve crimes. This charming series is highly atmospheric and rife with the history and mystery that is Charleston.

The Scrapbooking Mysteries – a slightly edgier series that take place in New Orleans. The main character, Carmela, owns Memory Mine scrapbooking shop in the French Quarter and is forever getting into trouble with her friend, Ava, who owns the Juju Voodoo shop. New Orleans’ spooky above-ground cemeteries, jazz clubs, bayous, and Mardi Gras madness make their presence known here!

The Cackleberry Club Mysteries – set in Kindred, a fictional town in the Midwest. In a rehabbed Spur station, Suzanne, Toni, and Petra, three semi-desperate, forty-plus women have launched the Cackleberry Club. Eggs are the morning specialty here and this cozy cafe even offers a book nook and yarn shop. Business is good but murder could lead to the cafe’s undoing! This series offers recipes, knitting, cake decorating, and a dash of spirituality.