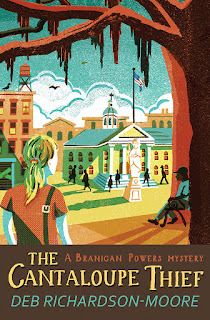 The decade-old death of matriarch Alberta Grambling Resnick is the only unsolved murder in Grambling, Georgia. With the passage of time, townspeople assumed the deed had been committed by a transient with no real motive or ties to the community. Newspaper reporter Branigan Powers wants to explore that theory by investigating among the town’s homeless population. Even she thinks it’s a long shot – until homeless people start dying.

As the action careens from northeast Georgia to the Carolina coast, from posh homes to hidden encampments, Branigan is racked by fear that she has awakened a murderer. Desperate, she seeks help from Malachi Ezekiel Martin, a homeless veteran who glides unseen through the town. But can she trust him?

The Cantaloupe Thief is a murder mystery but not like one you’ve read before. It asks what happens when people are invisible. What impact does that have on the rest of us?

With The Cantaloupe Thief, debut author Deb Richardson-Moore has penned a fantastic mystery novel – compelling, entertaining, and memorable in every way. Deb’s writing is top notch, not a single word wasted. The mystery itself is well plotted with the gradual peeling back of layers – and an ending that left me in shock. Two other strengths are the rich character depth and an unusual focus on the homeless. This is one of my all-time favorite mysteries, making Deb Richardson-Moore a “must read” for me.

The Cantaloupe Thief is published by Lion Hudson, a British publisher that I count on for excellent stories, many of which are set in Great Britain. While The Cantaloupe Thief takes place in the southeast US, it has the same feel as other Christian fiction by this publisher – a little more liberal than American standards, but nothing that I found offensive.

The story is set in the mid-size northeast Georgia town of Grambling, described in such vivid detail that it felt like a major character. As a resident of Georgia, I loved the incorporation of familiar places like Lake Hartwell and Edisto, SC. But as picturesque as Grambling might be, there was another side to it – that of the city’s homeless population, who play a big part in the story. I loved the realism of this theme and the fact that Deb conveyed their stories and thoughts in ways that made me think. Deb actually pastors the homeless at a church in South Carolina, and her caring passion is evident on every page as she gives a face and voice to the homeless.

In investigating the cold-case murder of the wealthy Alberta Grambling Resnick ten years earlier, Branigan seeks the help of Malachi Ezekiel Martin, a homeless war veteran who is also a possible suspect. The story focuses on the concept that homeless people get overlooked, and hence see things that are concealed from the rest of the population. Malachi had “lived in Grambling’s shadows long enough to know about its underside; to know how the rich and poor, the sophisticated and the raw, the proper and the dangerous, merged after dark.” Also adding much interest to the story is that Branigan’s twin brother is a homeless addict.

I’m intrigued by Malachi and also enjoyed Branigan’s friend Liam, who runs a shelter for the homeless. Branigan, Malachi and Liam are a complex trio and I’m very eager to see these characters developed further. The Cantaloupe Thief begins a promising new series. “Best of the best” for me. 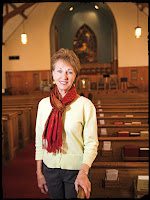 Deb Richardson-Moore is the author of a 2012 memoir, The Weight of Mercy, and a novel, The Cantaloupe Thief, to be released in June 2016. Both are published by Lion Hudson of Oxford, England.
Deb also serves as pastor of the non-denominational Triune Mercy Center in Greenville, South Carolina, where she works to make homeless parishioners feel respected, loved – and deserving of a pastor who dresses up for them, even in high heels. She is a Greenville native and a graduate of Wake Forest University (Winston-Salem, NC) and Erskine Theological Seminary (Due West, SC).
She worked for 27 years as a writer for The Greenville News, covering art, theater, general features and religion. After obtaining her Master of Divinity degree in 2005 and being ordained by First Baptist Church of Greenville, she accepted the position as pastor of Triune. Triune is a church that brings homeless, working poor, middle-class and wealthy parishioners into community.
Deb is married to Vince Moore, who is director of media relations for Furman University. They have three grown children – Dustin, Taylor, and Madison.

Thank you to Lion Hudson for providing a copy of this book in exchange for my honest review.