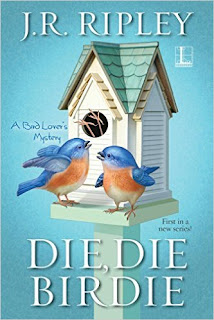 For Amy Simms, hatching a birding shop in her hometown of Ruby Lake, North Carolina, hasn’t exactly been a breeze. But could a deadly discovery clip her wings for good?

It’s just days before Amy plans to open Birds & Bees on the first floor of her creaky Victorian house, but delayed seed shipments have prevented the fledging owner from stocking her shelves. And it doesn’t help that Amy’s best friend and business partner is out of town indefinitely. With locals skeptical about the niche shop taking flight, the last thing Amy needs now is a dead man in her storeroom-or for a crotchety tenant to catch her holding a bloody birdfeeder hook over his body . . .

Pigeonholed as a leading murder suspect by police and lacking a solid alibi, Amy’s delving into the victim’s ugly past and buzzing around Ruby Lake for clues on his killer . . . before she ends up like so many of her beloved feathery friends-trapped behind bars!

Die, Die Birdie begins a new series by J. R. Ripley that many cozy mystery fans will enjoy. The town setting of Ruby Lake, North Carolina is appealing – and populated with lots of interesting, quirky people. The lead character, Amy, is opening a small shop that specializes in all things related to birds – she even mixes her own birdseed – and it’s housed on the first floor of a Victorian house.

The narrative is first person, as seen from store owner Amy’s point of view, which worked well. Finding herself suspected of murder, she sets out to investigate the deceased’s ugly past. The mystery was well plotted, easy to follow, and I was surprised at the outcome, as is usually the case. I also liked how some secondary storylines added depth to the story.

I love it when a character who initially rubs me the wrong way gradually becomes quite likeable, and that was the case with Amy’s nosy tenant, Esther “Pester.” I also enjoyed the focus on birds and nature. Having a hummingbird feeder is just about all I know about birds, but they are a beautiful part of God’s creation and I appreciated all the interesting tidbits of information that Amy shared. Another interesting character is Aaron, a talented and creative builder of birdhouses.

Although I didn’t find this first story totally engaging for some reason, I did enjoy several aspects of it and think the series will only get better. For cozy mystery fans, Die, Die Birdie is well worth a look. 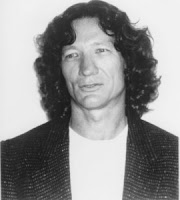 J.R. Ripley is the pen name of Glenn Meganck, the critically acclaimed author of the Tony Kozol mystery series. As a member of the Mystery Writers of America, he has chaired the Edgar committee for Best Original Paperback novel and served on the Best Short Story Committee. As a member of the International Association of Crime Writers, he has served on the Hammett Award committee for Best Novel.

When not writing books, Glenn is writing songs, often singing them to the consternation of his audience and neighbors, or involved in one of his many passions, none of which have involved any of the dead bodies that seem to keep cropping up in his mysteries.


Thank you to Great Escape Tours for providing a copy of this book in exchange for my honest review.