Review: The Case of the Clever Secret Code + Tour GIVEAWAY 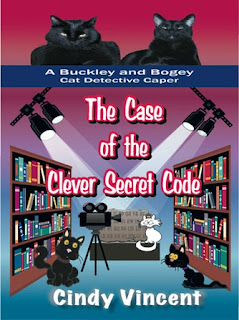 Buckley and Bogey, Cat Detectives, find their next big case with the Buckley and Bogey Cat Detective Agency to be their most difficult yet. It all starts one hot summer day, when the boys are sitting in the front window of their Mom’s antique store. That’s when they see a big, black limo crawling up the street and going right through downtown St. Gertrude. So who is in that long, black car? None other than famous movie star, Steele Bronson! And his surprise arrival sends the entire town into a tizzy! Especially when he announces his plans to shoot his next movie right there at the St. Gertrude Library, housed in a historic four-story mansion. And wouldn’t you know it, but it all happens just Gracie, the boys’ human sister, is a finalist in the town’s Fourth of July essay contest. Holy Catnip!

But it isn’t long before Buckley and Bogey realize there is something very wrong with the whole picture . . . including the one that Steele Bronson is filming. Because it soon becomes very clear that the guy is after much more than just an Academy Award. And when the drama turns to danger for the boys and their family, that’s when Buckley and Bogey jump into the scene. Because this is one case that has it all — from Fourth of July festivities to tales of the American Revolution, and from a secret code to a hidden key! And unless Buckley and Bogey want to see this movie turn into a tragedy, it’ll be up to them to crack the case . . . as well as the secret code . . . Holy Mackerel!

After turning the last page of The Case of the Clever Secret Code, I now know that it is possible to read an entire book with a smile on my face. This story is well crafted, imaginative, heartwarming, and funny. I love Cindy Vincent’s mystery series about Buckley & Bogey so very much! Written on a level that young readers in the 8- to 12-year-old range would enjoy, these stories not only entertain, but cleverly project faith values throughout. In fact, it’s like Cindy uses storytelling as a method to convey important Christian life lessons.

Buckley and Bogey simply stole my heart, as did the other three household kitties, Princess, Lil Bit, and Miss Mokie, the “Wise One.” The story is told through the eyes and voice of Buckley, and these cats have the human abilities of communication, reasoning, and problem solving. But going much deeper than fantasy and humor are the valuable life lessons conveyed on every page – such as teamwork, thinking about others instead of self, and doing the right thing, even when it’s hard. Buckley conveys a deep thankfulness for being rescued and having a forever home.

The arrival of a Hollywood celebrity creates all kinds of havoc and the lesson of human worth is conveyed, that it is “age and wisdom” that truly makes someone valuable. Twelve-year-old Gracie also learns the hard way that winning has to be deserved, for in the words of Miss Mokie, “Without the sense of having achieved something, what good is the trophy?” 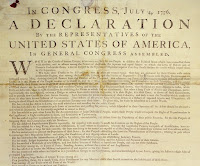 Another theme that I loved is that of freedom, conveyed through Gracie’s essay and the story told by her classmate, Dylan, of his grandfather in Russia who defected to the United States. The American Revolution has always been my favorite historical era and I was intrigued by a bit of history that I had not read about before. The night freedom from England was declared, 200 copies of the Declaration of Independence, known as Dunlap Broadsides, were printed and sent throughout the colonies. What an exciting ride that must have been, and the value of one of these documents today is incredible! 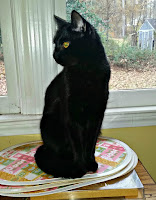 Among all that pulls at the heartstrings in this series, it is especially touching how Cindy always includes the adoption of rescue cats – in this case, three kitties who lost their human and need a new "forever home" together. On a spiritual level, that concept makes me think of the “forever home” we will one day have in heaven. And I can’t help but mention how Cindy has honored the memory of my beloved Ebony through the character of Luke, a black cat with a white collar who runs the Buckley and Bogey Cat Shelter at a local church.

The Case of the Clever Secret Code is enjoyable in every way, even for adult readers. It would also work beautifully as a read-aloud story with children, creating many opportunities for instilling important life lessons. Highly recommended for young readers and cat lovers of all ages.

Click on these titles to see my review of the previous book in this series, The Case of the Jewel Covered Cat Statues, and a lovely devotional drawn from Cindy's interaction with cats, Cats Are Part of His Kingdom, Too 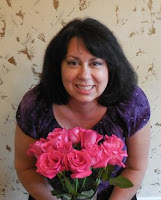 Cindy Vincent, M.A. Ed., was born in Calgary, Alberta, Canada, and has lived all around the US and Canada. She is the creator of the Mysteries by Vincent murder mystery party games and the Daisy Diamond Detective Series games for girls. She is also the award-winning author of the Buckley and Bogey Cat Detective Caper novels, and the Daisy Diamond Detective book series. She lives in Houston, TX with her husband and an assortment of fantastic felines. Cindy is a self-professed “Christmas-a-holic,” and starts planning and preparing for her ever-expanding, “extreme” Christmas lights display every year, sometime in the early Spring . . .

Thank you to Cindy and Singing Librarian Books for providing a copy of this book in exchange for my honest review. 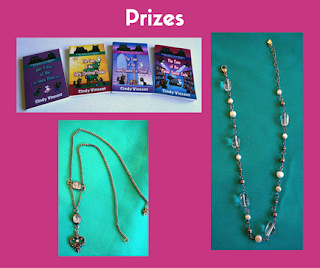 Email ThisBlogThis!Share to TwitterShare to FacebookShare to Pinterest
Labels: Cats, Christian Fiction, YA