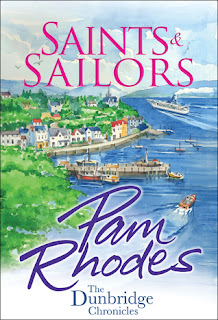 Fourth in the Dunbridge Chronicles series, Neil Fisher’s old and new congregations come together on a cruise round the British Isles.

Three groups of people come together for a more-or-less godly cruise around the British Isles to visit Lindisfarne, the Loch Ness Monster Museum, the isles of Iona and Mull, Dublin, and the Scilly Isles. There are familiar faces from St. Stephens, Dunbridge; some new folk from Neil's new parish in Derbyshire; and the slightly long-suffering crew, not least its skipper.

A cruise is a great place to make new friends, with leisure for decent conversations. It can also be an awkward, confined space with those you would really rather avoid. Some of the party face tough decisions--not least of which is whether to say “yes”--and some tensions just cannot be left on land.

This book is a delight, full of compassion, humor, and Pam Rhodes's astute observations.

Let me begin by saying that I am a huge fan of British fiction with its small-town settings and quirky characters. Pam is an excellent writer and has created a series that I’ve come to enjoy overall.

The theme of Saints and Sailors is so much fun – church members from Neil’s current church and his previous one coming together for a Christian cruise around the British Isles, tracing the footsteps of ancient Celtic saints who represent the cradle of Christianity in England. It was wonderful to visit places like Lindisfarne, the Isle of Mull, and Honfleur, learning of their history through the characters’ experiences.

Through her entertaining ensemble cast, Pam tackles several real-life issues that readers can identify with – grief, loneliness, pride, dementia, teen pregnancy, second chances, and death. Some scenes were humorous, others touching – such as Ida, who suffered from dementia, responding to the singing of beloved hymns, and Arthur recalling his D-Day experiences to his family.

Having been a church musician for more years than I care to admit, I found the theme of hymnody especially enjoyable. I had to laugh at the scene where Carole, pushing for her own ideas of what the musical standard should be, told Clifford:  “At our services to date, your ill-prepared team have come up with far too many modern choruses which may be known today, but will certainly be forgotten tomorrow.” That controversy is still going on in churches around me!

However, there was one element involving the Christian faith that rubbed me the wrong way. While other issues that the characters were facing seemed to be dealt with in a straightforward biblical way, the advice to follow your heart was given by Clifford to a young musician dealing with same-sex attraction:  “This is your life, your time. The decisions you make must feel right for you.” I’m not trying to single out this controversial issue, because no matter what the fleshly desire is, those words kind of came from nowhere and seem at odds with a loving and holy God who says that “to obey is better than sacrifice.” So while there’s much that I liked about this story, I don’t believe it’s one that conservative readers would enjoy.

Please click on the title to see my review of the previous book, If You Follow Me 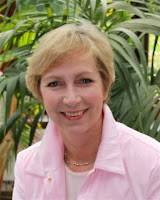 Pam Rhodes for many years has presented the world's number one religious television program ,Songs of Praise on BBC. She writes for the UK national newspaper, the Daily Mail, and is also a successful novelist. She is author of The Dunbridge Chronicles, With Hearts and Hymns and Voices, and four other novels, as well as a number of non-fiction books.

Thank you to Kregel/Lion Fiction for providing a copy of this book in exchange for my honest review.