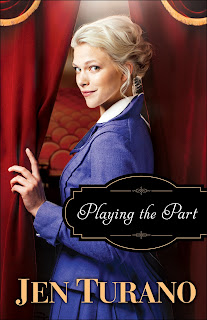 Playing the Part
By Jen Turano
A Class of Their Own, #3
Bethany House, 2016

Lucetta Plum is an actress on the rise in New York City, but is forced to abandon her starring role when a fan’s interest turns threatening. Lucinda’s widowed friend, Abigail Hart, is delighted at the opportunity to meddle in Lucetta’s life and promptly whisks her away to her grandson’s estate to hide out.

Bram Haverstein may appear to simply be a somewhat eccentric gentleman of means, but a mysterious career and a secret fascination with a certain actress mean there’s much more to him than society knows.

Lucetta, who has no interest in Abigail’s matchmaking machinations, has the best intentions of remaining cordial but coolly distant to Bram. But when she can’t ignore the strange and mysterious things going on in his house, it’ll take more than good intentions to keep her from trying to discover who Bram is behind the part he plays.

Playing the Part is pure delight – crazy good, really – and it leaves me asking myself why I haven’t discovered Jen Turano’s writing before now. Witty, charming, filled with memorable characters and a vivid sense of place. I have obviously not read the previous two books, but this story can stand alone. I do recommend reading the series in order, however, and I plan to quickly catch up on what I’ve missed.

Playing the Part begins in 1882 at a theater in New York City, but quickly moves to Ravenwood, the gothic-like castle on the Hudson River that is home to the mysterious Bram Haverstein. Characters are well developed and so very likeable – except those who play the villain, of course.

Bram is reliable, with an air of mystery about him, and he’s very romantic! He’s kind and compassionate, cares about his family and staff, and is well known for helping people in need by staffing his home with people from the tenements  - people whose backgrounds are a little questionable and definitely aren’t qualified for their household positions. But oh, how loyal they are! I loved that he also rescues abandoned and abused animals and brings them to his castle.

Lucetta is a complex character, quite different from what people see on stage, and utterly delightful. She has always shied away from men who held her in high regard, knowing that her stage persona was not a true reflection of who she really was – and to be loved and accepted for who we are is a desire we can all relate to. Let me just say that getting to know the real Lucetta is fun and packed with surprises.

Lucetta and Bram are surrounded by a deliciously quirky ensemble cast that I adored, even the animals – especially Geoffrey the goat. And what exquisite, humor-filled writing! If I didn’t know better, I would think I was reading one of Georgette Heyer’s Regencies, for their laugh-out-loud styles are very similar. Excellent job with just the right amount of humorous situations and dialogue.

Complex characters, romance, and danger all combine in this relationship-driven story. Readers will appreciate the theme of being the person we were created to be and not trying to live up to the expectations of others. We also see spiritual themes of forgiveness, second chances, and using our talents and abilities to help those in need. I appreciate being reminded that God brings people into our lives for a reason, reflected in Bram’s words:  “When you cross paths with a person who is in need, and you have the solution to that need, well, God expects you to put that solution to use. I don't know about you, but I'm not one to argue with God."

Playing the Part has made Jen Turano one of my favorite authors. Those who have read the previous two books will enjoy seeing some of the characters again – Harriet, Oliver, Reverend Gilmore, Millie, Everett, and Abigail - and will adore the epilogue.

Jen Turano is the best-selling, critically acclaimed author of The Ladies of Distinction series, and A Class of Their Own series, published through Bethany House Publishers. Her novel, After a Fashion, was chosen as a top pick from Romantic Times, as well as being named a top ten romance of 2015 from Booklist. It is also a nominee for Romantic Times 2015 Reviewers’ Choice Award.  Her book, A Most Peculiar Circumstance, was chosen as a top ten romance by Booklist in 2013. Her seventh book, Playing the Part, will release in the spring of 2016, followed by a new four-book series, The Wallflowers.

When she’s not writing, Jen spends her time outside of Denver with her husband and neurotic Cattle Dog, enjoying herself as an empty-nester since her son recently abandoned her for the college life. She is represented by Susan Brower of the Natasha Kern Literary Agency.

Thank you to Litfuse Publicity and Celebrate Lit for providing a copy of this book in exchange for my honest review.

I try to promote on social media, but the best way to keep up with my reviews and occasional giveaways is to subscribe by e-mail in the top right corner (no pressure intended).