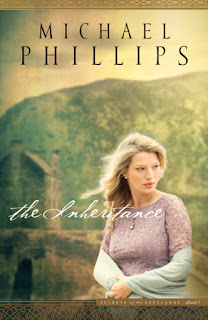 The Inheritance
By Michael Phillips
Secrets of the Shetlands, #1
Bethany House, 2016


Congratulations to Cindi on winning a copy of The Inheritance! I hope you enjoy it as much as I did, Cindi. And thank you to all who entered and shared. More reviews and giveaways coming soon!

The death of the clan patriarch has thrown the tiny Shetland Islands community of Whale's Reef into turmoil.

Everyone assumed MacGregor Tulloch's heir to be his grand-nephew David, a local favorite, but when it is discovered that MacGregor left no will, David's grasping cousin Hardy submits his own claim to the inheritance, an estate that controls most of the island's land. And while Hardy doesn't enjoy much popular support, he has the backing of a shadowy group of North Sea oil investors. The courts have frozen the estate's assets while the competing claims are investigated, leaving many of the residents in financial limbo. The future of the island-and its traditional way of life-hangs in the balance.

Loni Ford is enjoying her rising career in a large investment firm in Washington, DC. Yet in spite of her outward success, she is privately plagued by questions of identity. Orphaned as a young child, she was raised by her paternal grandparents, and while she loves them dearly, she feels completely detached from her roots. That is until a mysterious letter arrives from a Scottish solicitor. . . .

Past and present collide in master storyteller Phillips's dramatic new saga of loss and discovery, of grasping and grace, and of the dreams of men and women everywhere.

Let me start by saying that the ratings for this book vary greatly and I can understand why, although I feel differently. The action isn’t fast paced, there’s more description than dialogue, and a good bit of time is spent in the past, remembering and reflecting. Now, with that being said, I’ll share my personal thoughts . . .

The Inheritance is a fictional jewel, an epic masterpiece crafted by a masterful storyteller. It’s quite a unique story, with a style, quality and depth rarely found in Christian fiction. From the very first paragraph, I knew that the book I held in my hands would prove to be exceptional – and it was, greatly touching the soul of this reader.


The story is primarily set on the Shetland Island of Whales Reef, a Scottish North Sea island that derived its income from fish, wool, and oil. I love it when setting becomes a major character, and I was instantly pulled into this haunting and atmospheric locale – sensing the loneliness of the moors, hearing the crashing of the waves at the base of cliffs, my senses filled with the sights and sounds of village life. The islanders themselves are fascinating, an independent people of both Celtic and Norwegian heritage – a people who, “though steeped in tradition, they were neither ignorant nor backward.” The retrospective and descriptive parts that some readers found slow and boring were anything but that to me. Instead, I reveled in the complexity of plot and was captured by the intrinsic beauty of past and present woven together.


Rich in historical detail, this multi-generational saga focuses on the Tulloch family’s heritage of leadership, through lairdship and chieftainship. With a character depth and wisdom beyond his years, presumptive heir David Tulloch is a wonderfully sympathetic and appealing character. He revered his Celtic heritage and had “a fierce determination to protect the people of the island from any outside influences that would once more disrupt their way of life.” The care and attention he gives to the people is heartwarming. And I loved his spiritual depth … how, having lived through a cult-like influence that pitted family against family, he sought refuge in the Gospels. “There his aching soul found sustenance. The red letters of his New Testament send down roots into every corner of his being.”

A lot of series foundation is laid in this first story, both historically and in dual storylines involving David and the American, Loni. Suspense also builds as the story progresses – over elements such as greed, desire for power, sustaining a beloved way of life, and a seeking of the past. I also enjoyed seeing David grow as he wrestled over his personal responsibility to the people … “Were there times when one had to fight, when one had to lead, not follow . . . When did life require action?”

The Inheritance ends with the promise of so much more to come, which I eagerly anticipate reading. Book #2, The Cottage, releases in October 2016.

Michael Phillips is a bestselling author with more than 70 of his own titles. In addition, he has served as editor/redactor of nearly 30 more books. He is known as the man responsible for the reawakened interest in George MacDonald of the last 30 years.
In addition to the MacDonald titles adapted/edited for today's reader, his publishing efforts in bringing back full-length quality facsimile editions also spawned renewed interest in MacDonald's original work. Michael and his wife, Judy, spend time each year in Scotland but make their home near Sacramento, California.

I try to promote on social media, but the best way to keep up with my reviews and occasional giveaways is to subscribe by e-mail in the top right corner (no pressure intended).

BE SURE to leave your name and your email address in a safe format - [at] and [dot] - for the drawing. E-mail required for entry. Contest ends at midnight PST on Monday, May 16. Winner will be chosen by random.org and contacted by e-mail.