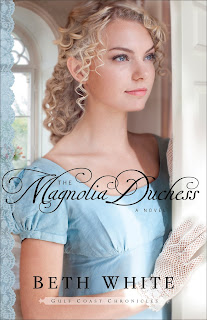 As the War of 1812 rages across the newly formed United States, another war rages in Fiona Lanier's heart--one that threatens to tear her family apart.

Fiona can scarcely take in the news of her brother's capture and imprisonment by the British Navy. It is almost as unbelievable as the half-drowned British sailor who is washed ashore on the beach of Navy Cove.

Charlie Kincaid claims to have no memory of his life before being discovered by Fiona, but in a world that seems saturated with treachery, she cannot be sure he is telling the truth.

As Charlie's memory returns in agonizing jags and crashes, he and Fiona discover that falling in love may be as inevitable as the tide. But when political allegiances collide, they'll each have to decide where their true loyalty lies.

Beth White has another winner with The Magnolia Duchess – actually, the whole series is a winner with me. Each story is highly entertaining and can stand alone because of different generations being featured, but reading the series in order will provide the most fulfilling reading experience. Book #2, The Creole Princess, was my favorite by a slight edge and it was wonderful to see Rafa and Lyse again, “still in love with one another after more than thirty years, eyes flirting, finishing one another’s sentences.”

Beth brings the early American Gulf Coast setting to life with a knowledge and passion about this area that I found fascinating. I mean, who knew that the Pensacola/Mobile/New Orleans area had such a tumultuous past with English, French and Spanish involvement in the fight for control? Add Indian tribes and pirates to the mix and things get even crazier. The Magnolia Duchess is a perfect blend of wartime themes and personal stories, with the essential military elements never becoming overpowering.

Romance fans will certainly be pleased with not one, but three exciting relationships. Great chemistry between Charlie and Fiona! “Charlie’s sudden arrival had yanked aside the curtain of time, flung open the window, and all but blinded Fiona.” Rafa and Lyse’s daughter, Maddy, and Desi, General Jackson’s interpreter, are strong secondary characters. Their romance is one of my favorite parts.

As I think back over this story, the words freedom and patriotism come to mind. There’s an emotional complexity involved because it was a time in which loyalties were divided, and hearts struggled with the conflict over duty vs. feelings.


“Could one really go to sleep as a Briton and
awaken as an American? How to settle the conflict
between responsibility and treason?”
– Charlie

I loved how Charlie grew spiritually, but there was something especially moving in seeing things afresh through Charlie's eyes, things that we sometimes take for granted . . . A commissioned officer in His Majesty’s service gradually coming to understand the value America placed on freedom, and that Americans wouldn’t give up.

Recommended to all who enjoy historical romance.

Click on these titles to see my reviews of the previous two books in this series:
The Pelican Bride
The Creole Princess

Beth White's day job is teaching music at an inner-city high school in historic Mobile, Alabama. A native Mississippian, she writes historical romance with a Southern drawl and is the author of The Pelican Bride and The Creole Princess. Her novels have won the American Christian Fiction Writers Carol Award, the RT Book Club Reviewers' Choice Award, and the Inspirational Reader's Choice Award.