In Golden Splendor by Michael K. Reynolds is book 2 in the Heirs of Ireland series. This epic adventure is a wonderful sequel that continues the story of the Hanley family, who immigrated from Ireland in the 1840s. Dramatic settings range from the beautiful Rocky Mountains and Sierra Mountains to San Francisco's Barbary Coast. We see the blending of many cultures in America's West during the Gold Rush, along with racial prejudice and greed. This novel captures the indelible hope and spirit of the Irish people in a way that both entertains and inspires.

Irish immigrant Seamus Hanley is a lost soul, haunted by his past as a U.S. Army deserter and living alone in the wilderness of the Rocky Mountains in 1849. But after witnessing a deadly stage coach crash, he finds purpose in the scattered wreckage -- a letter with a picture of a beautiful and captivating woman named Ashlyn living in San Francisco at the height of the Gold Rush.

Moved by her written plea for help, he abandons all and sets out on an epic journey across the wild and picturesque American frontier. While being pursued by those who want to hang him, Seamus encounters fascinating characters including a young Pauite Indian who makes the ultimate sacrifice in helping Seamus to cross the snowy Yosemite Valley.

Battered but changed for the better, Seamus reaches San Francisco on Christmas Eve as the city burns in the tragic fire of 1849. But there is little time for rest, as an even greater, more harrowing adventure involving Ashlyn is about to begin. 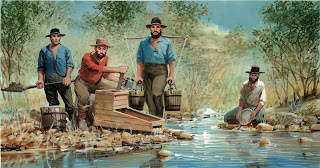 "They all were seeking redemption
in something incapable of delivering it."

Michael has a wonderful gift in being able to create a riveting story and memorable characters woven around historical events and settings that the reader can almost physically see and feel. His descriptions are so vivid that these settings become major characters. Clare and Andrew from the first novel, Flight of the Earls, play a part in this story, but the main focus is on Clare's brother, Seamus.

After a tragic accident back in Ireland, Seamus heard his father say, "You took my last chance to have a son I could be proud of," and he spent many years proving his father right. When the story opens, Seamus is living as a frontiersman in the Rocky Mountains, hiding from shadows of his past, haunted by his own foolish choices and shallow pursuits. But God has plans for a Seamus who is looking for something to fill the emptiness in his soul, and we see a slow but steady journey of spiritual awakening toward redemption and transformation. Michael injects some great humor here, for no one who has read the first book will believe the vocation into which Seamus is drawn, yet it really isn't surprising as the reader gets to know him better.

The publisher created a cover image that beautifully incorporates all that this story is about - from the picture of Ashlyn that drives Seamus to help, to the ghost ships in the bay, which hauntingly depict the greed for wealth. "From all over the world, they come here to this place. Stepping up to the shores, dripping wet with their desires. . . . Harsh was a community where most of its citizenry stayed only as long as it took to get off the ship, provision up, and head for the hills."

"The get-rich dreams of most miners were shipwrecked
on the crags of disillusion."


While the title, In Golden Splendor, certainly refers to the Gold Rush, there is a second and deeper meaning that refers to that which is true gold. As Seamus studies the Bible and comes to realize that there is power in God's words, Reverend Sanders says to him:  "God comes to us in golden splendor and His radiance in our lives far outshines any other treasure, any other accomplishment, and our lives become richer the more we understand this."

In Golden Splendor can certainly stand alone, but I highly recommend reading Flight of the Earls first, as the characters' backgrounds are so important in fully understanding this story. This series is a gem in the Christian fiction genre, and I highly recommend it to all readers. I hope we will see much more from Michael in the future. 
In Michael's words (taken from an online interview) . . .

What was your inspiration for The Heirs of Ireland series?

What spiritual themes run through this series?

In Golden Splendor carries on the overriding spiritual theme of the Heirs of Ireland Series, that is, an exploration of the Trinity. Whereas Flight of the Earls (the first novel in the series) covers the idea of Fatherhood, In Golden Splendor discusses our need for a Savior and our life journey in making that connection. So this should give you a clue of the spiritual theme of the concluding book of the trilogy, Songs of the Shenandoah.

See the FIRST Wild Card Tour page for more information. Much more can be learned about Michael and his novels at his website.  My review of Flight of the Earls can be found here.

The third story in this series, Songs of the Shenandoah, releases in January 2014.

This book was provided by FIRST Wild Card Tour and B&H Publishing through NetGalley in exchange for my honest review.