Review: A Clearing in the Wild 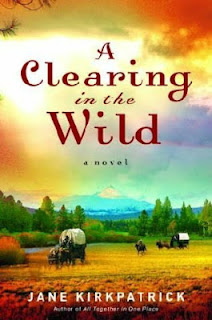 A Clearing in the Wild is the first of three novels in Jane Kirkpatrick's Change and Cherish series.  Based on true events and characters in the 1850's Oregon Trail history, this novel introduces young Emma Wagner and her husband, Christian Giesy, members of a German communal colony in Bethel, Missouri.


Willful and outspoken Emma continually chafes at the constraints placed on women in the Bethelite community, even questioning the decisions and motives of their beloved leader, Wilhelm Keil.  Frustrated because he sends her husband on missions during much of the early years of their marriage, she convinces Father Keil to send her with Christian and nine other men on a scouting trip to the Northwest Territory.  But as she escapes the confines of Bethel, she unexpectedly discovers a yearning for the warmth and caring of community.


This well-researched novel is based on true events surrounding the Bethel community and their search for a new location in their effort to escape the approaching war and laws that would restrict their community's freedom.  Weaving fiction with fact, Kirkpatrick gives an interesting narrative that delves into some interesting themes.  "Kirkpatrick opens up to the reader endless questions about gender roles, the values and pitfalls of community, the dangers of power and problems of blind allegiances . . ." (FaithfulReader.com).


The communal constraints and attitude toward the role of women is vividly pictured in these two quotes:  "In our colony, listening was a valued skill, at least for women" . . . "While women served, our voices were rarely heard except in music.  Did not our Lord wash the feet of His disciples?  Did not our Lord comfort those who grieved?  Is that not what women do?  And yet we are not invited into the halls of discussion, we are not asked to sit around the tables and talk with men making sense of a family's future.  No, we are asked to influence through our fathers and our brothers and our sons, but never with them."


The characters of Emma, Christian, and Father Kiel are richly drawn.  In Emma's eyes, Father Kiel was a flawed leader:  "While I believed that our leader had God-inspired visions that led him to the faith and the way we practiced it in Bethel, I also thought his humanity clawed through sometimes, tearing up what God intended . . . "


Kirkpatrick also has a gift for describing the beautiful landscapes on the journey from Missouri to the Washington Territory.  While the narrative can move slowly at times, it is an enjoyable read overall and I recommend it to those who enjoy character-driven drama.  The series continues with A Tendering in the Storm and A Mending at the Edge.


For more information on Jane Kirkpatrick and her books, visit her website at http://www.jkbooks.com/


This book was provided by WaterBrook Multnomah through the Blogging for Books program in exchange for my honest review.
Posted by Carole at 2:31:00 AM