Review: Into the Whirlwind 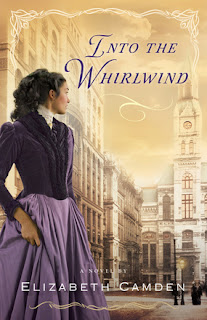 After her father’s death, Mollie Knox takes over his watchmaking company and uses her head for business to solidify the good name of the 57th Illinois Watch Company. Her future looks bright until the night her beloved city is destroyed in the legendary Great Chicago Fire. With her world crumbling around her, Molly must do whatever it takes to save her company in the aftermath of the devastating fire.

Zack Kazmarek is an influential attorney with powerful ties to the political, mercantile, and ethnic roots of Chicago. His only weakness is Mollie Knox, a woman who has always been just beyond his reach. However, all bets are off after the fire destroys Chicago, and Mollie is in desperate need of assistance. Just as Zack finally begins to pursue the woman he loves, competition arises in the form of a hero from her past who can provide the help she needs to rise from the ashes.

While Mollie struggles to rebuild, the two powerful men battle for her heart. One has always loved her, but the other has the power to save her. In the race to rebuild the city, can she survive with her business and her heart intact? 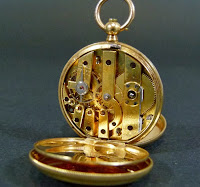 Similar watches were made by the
57th Illinois Watch Company

Into the Whirlwind (Bethany House) is a turbulent love story set amidst the rubble of Chicago as Mollie endures the challenge of survival and the triumph of rebuilding the city. This stand-alone novel is steeped in history and filled with rich characterization, emotional impact, and beautiful prose.  I greatly enjoyed this character-driven drama and will be reading more of Elizabeth Camden's work.

There's often a tendency to skim over descriptive passages, but not so in this book! Elizabeth excels at capturing the feel of a historical event, bringing it to life and making you feel as though you are there. The story begins on October 8, 1871, as the raging Chicago fire is destroying everything in its path: "The fire had burned a four-mile path along Lake Michigan that was almost a mile wide. More than a hundred thousand people had been left homeless, and half the businesses in the city had been burned out." One of the disastrous results of the fire was the collapse of the local insurance industry, and I loved how Elizabeth creatively worked this into her narrative through Zack's efforts in reform.

Mollie and Zack are strong leading characters. 26-year-old Mollie Knox excels at business and runs her father's 57th Illinois Watch Company. She is a hardworking, compassionate leader who trains fifteen wounded veterans from her father's military unit in the art of high-end watchmaking and devises ways to keep the company afloat.

Zack Kazmarek is an attorney for Hartman's, the only store in Chicago that could afford to carry Mollie's expensive watches. Zack is a bold, confident man, protective of those within his care - and he embodies characteristics that we love in a hero - he is hardworking, honest, loyal and kind. It was especially touching to see how he loved and cared for his Polish immigrant parents.

While the fire taught Zack how important Mollie was to him, she wasn't ready for a relationship. "Zack was a wild, unpredictable force of nature, while she lived in an orderly world of ticking watches and production schedules." And to further complicate matters, the handsome and gentlemanly Colonel Richard Lowe comes sweeping in to rebuild Mollie's company. "He was Lancelot without the pesky adultery problem."

As much as I admired Mollie as a caring employer who struggled to succeed in business because she was a woman, she wasn't my favorite heroine. I felt that she made some bad decisions out of pride, with heartbreaking results in one instance, and I cringed at her often harsh, unfeeling words spoken to Zack in anger. On the other hand, I felt that Mollie not being a "perfect" character added to the depth and enjoyment of this story.

There is a strong cast of supporting characters, especially in the wounded veterans who work with Mollie.  I also came to love Sophie, the young girl rescued by Zack and Mollie during the fire. "Extraordinary in her insolence" at first, she blossomed when given the opportunity to find purpose in life through hard work and being part of a team.

Into the Whirlwind is a fascinating and engrossing story that I highly recommend to all readers. 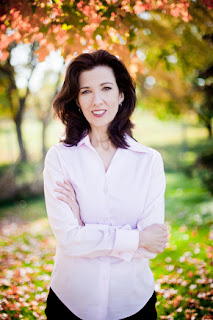 "I am a college librarian in central Florida by day, but by night I can be found pounding out inspirational historical novels the moment the sun goes down. I love writing books about fiercely intelligent people who are confronted with profound challenges. As a rather introverted person, I have found that writing is the best way for me to share my faith and a sense of resilience with others."

Elizabeth Camden is the award-winning author of four books, including Against the Tide (2012), winner of a RITA Award, Christy Award, and Daphne du Maurier Award. With a master's in history and a master's in library science, she is a research librarian by day and scribbles away on her next novel by night. Elizabeth lives with her husband in Florida.

For more information about Elizabeth and her books, visit . . .

This book was provided by Bethany House in exchange for my honest review.
Posted by Carole at 11:34:00 PM No comments: