I was listening to the news last night as the reporter talked about Black Friday, Cyber Monday and Super Saturday, the busiest shopping days of the year. Suddenly I just wished all that could be stripped away, leaving only the Christ child in a manger.

I came across a story about three years ago that changed the way my husband and I do our Christmas giving, and I'd like to share it. It's simply called "The Envelope."

"It all began because my husband, Mike, hated Christmas — oh, not the true meaning of Christmas, but the commercial aspects of it: overspending, the frantic running around at the last minute, the gifts given in desperation.

"Knowing he felt this way, I decided one year to bypass the usual shirts, sweaters, ties... I searched for something special just for Mike.

"Our son Kevin was wrestling at the junior level at the school he attended; shortly before Christmas, there was a non-league match against a team sponsored by an inner-city church. These youngsters, dressed in sneakers so ragged that shoestrings seemed to be the only thing holding them together, presented a sharp contrast to our boys in their spiffy blue and gold uniforms and sparkling new wrestling shoes. As the match began, I was alarmed to see that the other team was wrestling without headgear.

"It was a luxury the ragtag team obviously could not afford. We ended up walloping them. As each of their boys got up from the mat, he swaggered around in his tatters with false bravado, a kind of street pride that couldn't acknowledge defeat.

"Mike shook his head sadly. 'I wish just one of them could have won,' he said. 'They have a lot of potential, but losing like this could take the heart right out of them.' That's when the idea for his present came.

"That afternoon, I went to a local sporting goods store and bought an assortment of wrestling headgear and shoes and sent them anonymously to the inner-city church. On Christmas Eve, I placed an envelope on the tree, the note inside telling Mike what I had done and that this was his gift from me. His smile was the brightest thing about Christmas. Each Christmas, I followed the tradition — one year sending a group of mentally handicapped youngsters to a hockey game, another year giving a check to a pair of elderly brothers whose home had burned to the ground the week before Christmas.

"The envelope became the highlight of our Christmas. It was always the last thing opened on Christmas morning, and our children would stand with wide-eyed anticipation as their dad lifted the envelope from the tree to reveal its contents. As the children grew, the envelope never lost its allure.

"The story doesn't end there. We lost Mike due to cancer. When Christmas rolled around, I was so wrapped up in grief that I barely got the tree up. But on Christmas Eve I placed an envelope on the tree, and in the morning it was joined by three more.

"Each of our children had placed an envelope on the tree for their dad. The tradition has grown and someday will expand even further with our grandchildren standing around the tree with wide-eyed anticipation watching as their fathers take down the envelopes.

"Mike's spirit, like the Christmas spirit, will always be with us."

I was moved by this story and started following its example in my gift giving for Dwight, and the next year he started doing the same for me. We can't afford to outfit a sports team, but we contribute in each other's honor to a mission that is dear to our hearts. Last year he gave to a juvenile prison ministry that I have volunteered with; I wonder what it will be this year.

The only thing I miss about Black Friday is hearing the Salvation Army bell ringers, and they're getting harder to find each year. "The Envelope" has truly made our Christmases memorable.
Posted by Carole at 9:57:00 PM 4 comments:

Email ThisBlogThis!Share to TwitterShare to FacebookShare to Pinterest
Labels: Christmas 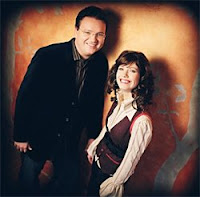 Our music minister introduced us to the music of Keith and Kristyn Getty after hearing them at a conference, and we have come to love this couple and their music. They could best be described as modern-day hymn writers, with "In Christ Alone" being the most widely sung and recorded.

From their website: "Who is creating the next generation of hymns for the Church? And greater still, has the unique formula of the hymn been abandoned on the back pew of the praise & worship movement? Irish composers and artists Keith & Kristyn Getty don't believe so, and they're on a mission to revive the art of hymnody for a new generation."

Some of my other favorites are: The Power of the Cross, See What a Morning, Hear the Call of the Kingdom, and Beneath the Cross. Reading the words of their hymns is like a devotional in itself. I encourage you to check out their website and learn more about them: http://www.gettymusic.com/
Posted by Carole at 11:54:00 AM No comments:

Email ThisBlogThis!Share to TwitterShare to FacebookShare to Pinterest
Labels: Music

The Oak Leaves by Maureen Lang

Author Maureen Lang’s book is another delightful discovery, although I’m not sure “delightful” best describes it. Moving, endearing, thought-provoking come to mind. Here’s a description of The Oak Leaves:

“Two time periods are woven together through a nineteenth century journal belonging to Cosima Escott, a lovely half-Irish, half-English woman whom everyone considers cursed because so many of the males in her family are “feebleminded.” When Talie Ingram discovers her forbearer’s journal and learns five members of her family once died in a murder-suicide because of this “curse,” Talie sets the journal aside, convinced some skeletons are best left in the closet. Until she sees signs of developmental delay in her own son…”

It seems that the author’s own son was diagnosed with Fragile X Syndrome at the age of a year and a half, a situation very similar to that portrayed in her work of fiction. Maureen writes: “Upon the diagnosis, I had to accept one of my children would live a life of constant limitations. . . . Anyone who has a child with a disability knows what it's like to face the fact that your child is ‘different,’ that most hopes and dreams you hold for them probably won't come true.”

Maureen, like Talie in her book, went through the stages of fear, avoidance, anger – then finally acceptance, trust and peace. She concludes, “So if God takes you on a path you never expected to go, let go and look up. He's there in the midst of it all—with blessings you never expected, either.”

I know I’ve grown spiritually by reading The Oak Leaves, and look forward to the next book in this series, On Sparrow Hill. Thank you, Maureen, and also Tyndale Fiction for publishing these books.
Posted by Carole at 3:34:00 PM 3 comments:

Yesterday, like most of my Sundays, started out with a 7:30 worship rehearsal. (I was so thankful for coffee!) We sang one of my favorite worship songs, Mighty to Save. The chorus goes like this:

Talk about God’s timing! Yesterday’s devotional tied right in with those words, and made them even more meaningful. Here’s an excerpt from it:

“You and I are simply jars of clay – fragile and unspectacular – but inside these humble vessels, God stores the treasure of his presence. We can barely move molehills, but God has the power to move mountains.
“We have a choice to make. We can whine about our thorns in the flesh, or we can remember God’s promise, ‘My grace is sufficient for you, for my power is made perfect in weaknesses’ (2 Corinthians 12:9). We can gripe about our limitations and the things that we lack, or we can go in the strength we have.”

I love the sentence, “We can barely move molehills, but God has the power to move mountains.” I definitely want to go in the strength that I do have within me!
Posted by Carole at 9:22:00 AM 2 comments:

A friend told me a long time ago that I would love this book and I finally got around to reading it. Was she ever right! Thank you, Kathryn!

I was hooked from the very first sentence: "There are gods in Alabama: Jack Daniel’s, high school quarterbacks, trucks, big tits, and also Jesus. I left one back there myself, back in Possett. I kicked it under the kudzu and left it to the roaches . . ."

Familiar themes of a dysfunctional Southern family, coming of age in small-town Alabama, quirky characters, the black boyfriend and racial prejudice - Joshilyn Jackson handles all this and more with freshness and humor. I found this one hard to put down.

You won't believe the neighbor with the pet chicken!
Posted by Carole at 11:06:00 PM 5 comments:

First of all, let me say that I'm not a writer. Secondly, I always seem to lag behind when it comes to the latest tech trends. But I've recently discovered the world of Christian fiction blogs, and learned so much about authors and their books. Also, a close friend has a blog where she just writes daily about her life.