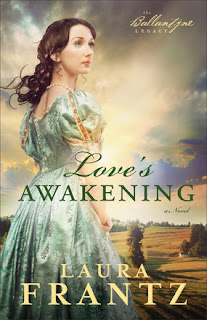 In  Love's Awakening by Laura Frantz, book 2 of The Ballantyne Legacy, we are reunited with Silas and Eden from Love's Reckoning and also introduced to new characters. Laura continues her tradition of masterful storytelling and, as with her other novels that I've read, has created a moving epic that will long linger in my thoughts.

In the spring of 1822, Ellie Ballantyne leaves finishing school and returns to the family home in Pittsburgh only to find that her parents are away on a long journey and her siblings don't seem to want her to stay. Determined to stand her ground and find her place in the world, Ellie fills her time by opening a day school for young ladies.

But when one of her students turns out to be an incorrigible young member of the Turlock family, Ellie knows she must walk a fine line. Slaveholders and whiskey magnates, the Turlocks are envious of the powerful Ballantynes and suspicious of their abolitionist leanings. As Ellie becomes increasingly entangled with the rival clan--particularly the handsome Jack Turlock--she finds herself falling in love with an impossible future.

Laura Frantz has a natural gift when it comes to creating characters and narratives that engage the emotions, set against a historical backdrop so rich in details so that you get a realistic feel of time and place. I never want to miss one of her novels.

Love's Awakening is set in Allegheny County, Pennsylvania during the pre-Civil War years of 1822-1823. Silas and Eden from the first novel don't appear until almost halfway through, and I couldn't believe how eager I was to see them again - and that's a mark of great storytelling. In the same way that I was drawn to Ballantyne patriarch Silas, I was also drawn to his son, Ansel, and youngest daughter, Ellie.

Ansel is an easygoing, unpretentious young man with great inner strength, and the musical tradition that began with Silas in Love's Reckoning continues through the talents of Ansel and Ellie. "Between running fugitives and seeking solace in music, Ansel led a strange double life." With all the Scottish/Irish jigs and folk tunes mentioned, combined with the classical duets of Ellie and Ansel, I almost think a soundtrack should be released with this novel!

And then there's the Turlock family! Jack is the younger son in a family that had come to America in the early 1700s, rich from illicit whiskey refining and smuggling in Ireland. The Turlocks were "poisonous distillers and slave owners in dire need of God's saving grace, and having none of it."

Although Pennsylvania had enacted legislation for slavery's gradual abolition, its grip on the state lingered. Pro-abolition vs. pro-slavery forces take center stage in this novel as the Ballantyne family provide safety as part of the Underground Railroad. The times were heartbreaking for slaves and dangerous for those who were willing to help them. A cupola atop the Ballantyne's New Hope estate, often lit by Ansel when it was safe for runaways to cross the river, symbolizes the hope of freedom to all.

Laura does a great job at blending spiritual themes throughout the story, such as the characters' strong faith in God's Word and a reliance on prayer. But one message that shines through is that we don't have to be defined by our family's actions. As Ellie once asked, "Doesn't Scripture also say the son shall not bear the iniquity of the father if he turns from his sins?"  It is a joy to watch Jack's spiritual awakening and the love between he and Ellie grow. In Jack's words, "As the old saint Whitefield said, we are immortal until our work is done."

The romance between Jack and Ellie is tender, sweet and emotional - another trademark of Laura's writing. Her use of quotations at the beginning of each chapter adds so much depth and meaning, as with this Leo Tolstoy quote that relates to Jack's feelings for Ellie:  "He felt now that he was not simply close to her but that he did not know where he ended and she began."

I don't think I've ever seen anyone more creative than Laura when it comes to Pinterest! With her Love's Awakening board, she has pinned much scenery, as well as period clothing and furniture. Referring to this board while reading will make the story come even more alive:  loves-awakening-the-ballantyne-legacy

I think the appeal of Love's Awakening reaches far beyond fans of inspirational historical romance, so I don't hesitate to highly recommend it to all readers. 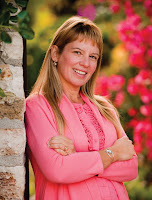 Silas is sixty or so in this second book and Eden is in her late fifties. I found it especially satisfying to write a more mature love story in the midst of their daughter, Ellie’s, youthful, innocent one. I hope readers feel the same!
Ellie has her mother’s caring heart but also a bit of her father’s determination and ability to stay the course when she feels something is worth fighting for. In this case it’s a family who is considered a lost cause by many – but not Ellie and certainly not the Lord.
Jack is very rough around the edges, a perfect foil to Ellie’s finesse. Therein lies their fatal attraction for one another – and more historical fireworks! It takes time for Jack to see the world through a different lens other than the rough one he was reared by. Silas and Ellie both help with this in surprising ways but the one who invites the most change is his younger sister, Chloe.
Themes that run through Love's Awakening are freedom and enslavement (both physically and spiritually) and the power of choice as it plays out over generations. The theme of family is perhaps the most enduring of all.

See Laura's website at laurafrantz.net to learn much more.

Love's Awakening is available August 2013 at your favorite bookseller from Revell, a division of Baker Publishing Group. Book 3 in The Ballantyne Legacy releases August 2014.

This book was provided by Revell as part of their blog tour in exchange for my honest review.
Posted by Carole at 1:38:00 PM 1 comment: