Review: Beyond These Hills 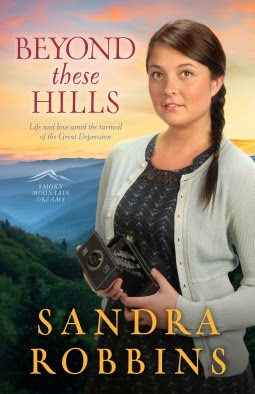 With Beyond These Hills, the third and final book in the Smoky Mountain Dreams series, Sandra Robbins brings a dramatic conclusion to the story of the families of Cades Cove. Spanning the years from the late 1800s to 1935, this series skillfully evokes the beauty and atmosphere of the Cades Cove, Tennessee region, while creating a multi-generational story arc of an endearing family who worked hard and ministered to the people there. This series is one that I will always remember and I recommend it highly.

It’s 1935, and Laurel Jackson fears the life she’s always known is about to become a memory. The government is in the process of establishing the Great Smoky Mountain National Park, and the people who’ve lived in the remote valley of Cades Cove must sell their land and move out. Determined to hang onto the land that’s been in their families for generations, the residents try every legal means at their disposal.

When a young government agent arrives with the assignment to get the last residents to sell, he thinks he’ll be finished in no time, but he hasn’t expected to meet a beautiful mountain girl just as determined to help her family keep their farm. As their attraction grows, they realize the barriers that stand between them can only be broken down by uniting their lives in Christ’s love. 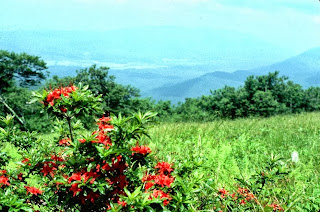 From early childhood on, I have spent many family vacations and fall foliage trips in the Smoky Mountains of North Carolina and Tennessee, so this book immediately touched my heart with the way Sandra made Cades Cove come alive, almost like a major character. It's fun to learn something new, and through Sandra's research, I learned that a "bald" is a type of mountain whose peak is covered with a meadow of wild grass instead of trees like other peaks in the range. Beyond These Hills can stand alone, but readers will get so much more out of it if they read the series in order.

This story is both heartwarming and bittersweet at the same time. It was great to be reunited with previous characters - Granny, Simon, Anna, Matthew and Rani - and then to continue on with Laurel, Matthew and Rani's daughter. But at the heart of this story is the controversy and heartbreak over the government's acquisition of Cades Cove property in order to establish the Great Smoky Mountains National Park.

The attraction between Laurel and Andrew is immediate, and I loved the way Laurel's family offered warm friendship and acceptance even though Andrew's mission was in opposition to everything they were fighting for.

As the son of Congressman Richard Brady, Andrew has a lot of baggage that includes his father's control and political aspirations for him. But rather than improving his political resume, Andrew had other motives for the Cades Cove assignment. "I came because I wanted to be a part of preserving this great wilderness for generations to come. And I thought while I was here I could figure out what I wanted to do with my life." 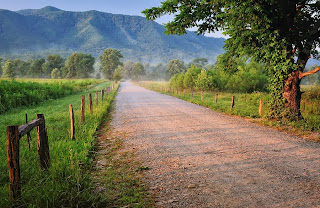 
From now on, I will be even more appreciative of God's creation when I get to enjoy the beauty of the Great Smoky Mountains, but I will be ever mindful of what the families of the Cades Cove region sacrificed in order for us to have that enjoyment. Families were initially assured that their homes wouldn't be touched, yet that promise was forgotten once the final bill was passed to create the park. Not only did these people give up land that had been in their families for generations, but it was the end of a way of life, a close community that took care of its own.

But in Matthew's words, I sense a double meaning in the title, Beyond These Hills:  "I don't know what's going to happen in the future, but I do know God will take care of me and my family no matter where we are, and that gives me the peace and strength to face each day that I live." I believe readers will appreciate the spiritual message and uplifting ending of this story.

I highly recommend Beyond These Hills to all who enjoy inspirational fiction. Sandra Robbins did a great job with the Smoky Mountain Dreams series and I hope she will write more stories set in the Great Smoky Mountains.


Learn more about Sandra and her books by visiting her website at sandrarobbins.net. 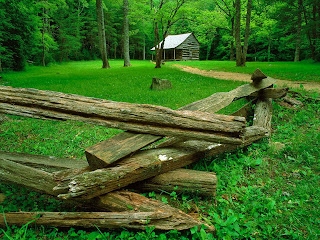 This book was provided by FIRST Wildcard Tours and Harvest House Publishers in exchange for my honest review.
Posted by Carole at 5:13:00 PM