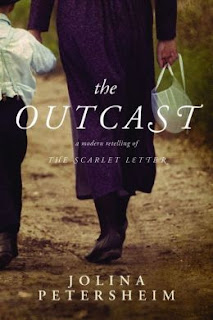 The Outcast is a stand-alone novel and a fantastic debut by Jolina Petersheim. Set in the Old Order Mennonite community of Copper Creek, Tennessee, it is described as an inspirational retelling of Nathaniel Hawthorne's The Scarlett Letter. This unusual and compelling novel stands out on many levels and is one that I can highly recommend.

Raised in an Old Order Mennonite community, Rachel Stoltzfus is a strong-willed single woman, content living apart from mainstream society until whispers stir the moment her belly swells with new life. Refusing to repent and name the partner in her sin, Rachel feels the wrath of the religious sect as she is shunned by those she loves most. She is eventually coerced into leaving by her brother-in-law, the bishop.

But secrets run deep in this cloistered community, and the bishop is hiding some of his own, threatening his conscience and his very soul. When the life of Rachel’s baby is at stake, however, choices must be made that will bring the darkness to light, forever changing the lives of those who call Copper Creek home.

The Outcast is an extremely strong novel with mature writing, complex characterization and storytelling from a first-time author. Although set in a Mennonite community, it is in a class all by itself when it comes to the Amish/Mennonite genre. Themes of legalism vs. forgiveness, dysfunctional father/daughter relationships, and holistic remedies vs. modern-day medicine are just a few elements in this story that I found emotionally moving and riveting.

"My face burns with the heat of a hundred stares." With this opening sentence, Jolina introduces Rachel and draws the reader into a story of betrayal, pride, hypocrisy - as well as repentance and forgiveness. Rachel's illegitimate pregnancy placed her amid those few who remained in the church while living outside its doctrinal parameters, and she exhibits great strength of character in the face of public scorn.

The Outcast has a strong, complex ensemble cast: Leah, Rachel's twin sister who was selfless to her core . . . loveable Ida Mae, who befriended Rachel . . . Judah, Rachel's childhood friend and soul mate . . .  Norman Troyer, a renowned holistic doctor who believes in the power of modern-day medicine . . . Tobias King, a bishop "so consumed with saving his reputation, he is in the process of losing his soul."

The story is unusually narrated by two voices: Rachel and that of deceased bishop, Amos King, father of Tobias and Judah. The voice of Amos makes me think of heaven's great cloud of witnesses in Hebrews 12:1. Amos realizes that he allowed Tobias to hide his sin and longs to help. "If I could somehow communicate to him that repentance is much more important than pride, and to her that forgiveness will break chains while anger will only keep her in bondage." Amos's voice added greatly to the story and I loved the depth that his perspective brought.

Jolina uses the vehicle of a child's illness very effectively to bring hidden actions into the light, which leads to a satisfying, but realistic, conclusion. I hesitate to use the almost overused reviewer phrase that "I found it hard to put this book down," but that is certainly true in this case. The Outcast goes on my list of favorites, and I am looking forward to Jolina's next book, The Midwife.

The Outcast is both heartbreaking and heartwarming at the same time, and I highly recommend it, not only to fans of Amish/Mennonite stories, but to all readers.

Q:  What gave you the initial idea for The Outcast?

A:  Four years ago, a family member told a true story about the power of desire that was left unchecked and how it trickled down through an Old Order Mennonite family, not only affecting that generation, but the generations to come. We were all sitting around the kitchen, and after the person finished speaking, I gasped, “That’s a book!”

Q:  One of my favorite characters is the ghost, Amos. How did you come up with him?

A:  My husband's grandfather, Amos, was my inspiration. . . . When I was standing beside Amos’s grave, I had this picture of my flawed heroine, Rachel, standing beside the former bishop of Copper Creek’s graveyard with this new life in her arms. Then I imagined that the spirit of the man whose body was being lowered into his grave could watch her pain from heaven and understand it more clearly than he had on earth. I knew then that I had the opening scene for The Outcast and the second narrator for my novel.

This book was provided by Tyndale Publishing in exchange for my honest review.
Posted by Carole at 1:10:00 PM 7 comments: 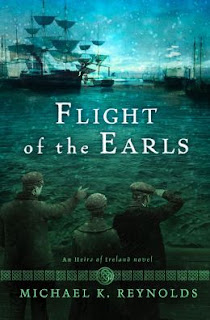 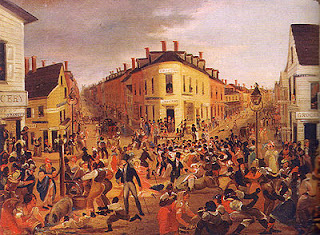