Review: Though My Heart Is Torn 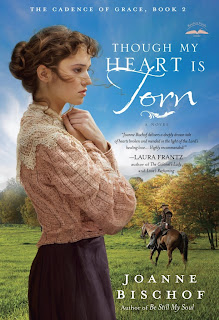 Though My Heart Is Torn by Joanne Bischof, book #2 in The Cadence of Grace series, is a rich, character-driven novel that begins the next chapter in the life of Gideon and Lonnie, with unexpected events that no one could have foreseen.  I've read a lot of excellent historical fiction, but this series is one of the very best.

Gideon O’Riley has two wives—but he doesn’t know it.

Settling into a simple life in the majestic Blue Ridge mountains, Lonnie and Gideon O’Riley have finally found happiness after the rocky start to their marriage. The roguish bluegrass musician has fallen in love with his gentle wife and the God she serves, and Lonnie rests secure in his tenderness for her and their young son. A heartless ruse interrupts their peace, bringing them back to Rocky Knob—and forces them to face the claims of Cassie Allan, a woman who says she is Gideon’s rightful wife.

As Gideon wades into the depths of his past choices, Lonnie is stunned by the revelations. She has no choice but to navigate this new path, knowing that surviving the devastating blow will take every ounce of strength she has.

While Gideon’s guilt and his bitterness towards Cassie threatens to burn up his fledgling faith, Lonnie wrestles to find the courage to trust the God who brought them together in the first place.

Riveting, compelling, emotional, and heart wrenching are just a few adjectives that I would use to describe Though My Heart Is Torn. This novel goes far deeper than the average Christian historical romance and is even stronger than the first book in the series. Joanne is a compelling storyteller who also excels at creating a sense of place in the lovely Blue Ridge mountains of Appalachia.

Just when it seemed that Gideon and Lonnie had found happiness at the end of Be Still My Soul, their family is ripped apart by circumstances beyond their control and Gideon finds himself united with Cassie in a bitter marriage built on regret and distrust. Gideon reflects:  "Lonnie was nothing like Cassie. Cassie was nothing like Lonnie. There wasn't an innocent bone in Cassie Allan's body. She and Gideon were cut from the same cloth. A convenience, he had once thought. An advantage to his desires in the dark hours of night."

I've been captivated by Gideon and Lonnie since the beginning. Gideon was drawn to Lonnie's God who had given him a second chance and was trying to become a good husband and father, but he discovers that past sins, while forgiven, still have consequences that hurt the ones we love. Lonnie discovers that her happiness with Gideon had been built on sand that was now crumbling. "She'd always known the scoundrel he'd been back then. But never had she imagined the price it would cost her."

I can understand that Joanne found this a difficult and challenging story to write, but I am so glad she did. As the plot began to unfold, I couldn't figure out how in the world she was going to bring it to any kind of tolerable solution, and I still can't, because that will surely come in the third novel.

"Cadence" is a musical term that describes a progression of chords moving to a close or point of rest, and giving the sense of resolution or completion. "Grace" is the free, unearned and unmerited favor and kindness of God. The series title, "Cadence of Grace," beautifully captures the essence of these stories. Rather than separate novels, I see them as three chapters of a narrative that builds toward that final resolution as the characters grow in God's grace.

Joanne incorporates a moving hymn into each of these stories, and it is "Before the Throne of God Above" that touches Gideon toward the end of this one. "The words sank in as no words ever had. They seemed to fill him. Fill the spaces of his soul that had felt so empty." This song is too meaningful not to share:


Before the throne of God above
I have a strong and perfect plea;
A great High Priest whose name is Love
Who ever lives and pleads for me.
My name is graven on His hands,
My name is written on His heart.


Selah
The first book in this series, Be Still My Soul, was nominated for a Christy Award, and it is my hope that Though My Heart Is Torn will also receive a nomination and win. I highly recommend this book to all readers.
The final book in this series, My Hope Is Found, releases in October 2013.
Joanne Bischof
In Joanne's words . . .
This was by far the most challenging story I've written. I've prayed over these words time and time again that they would be nothing less but honoring to God and that any piece that fell short would be trimmed away. At times it's been overwhelming to tell the story of a scoundrel, the sins of his past and the ways he and those around him were affected by it. I can't tell you how many times I saw this manuscript as crazy, and to hear from my editor that it was "brave" filled me with the courage to keep going.
Though My Heart Is Torn is meant to shed light on the fact that though sin will bring us far from God, there is always a way back, and that though choices in life aren't always easy, we must look to grace. Sometimes life lands around our feet in broken pieces, and all we can do is allow the Lord's strength to fill us as we pick up those portions, fitting them back together with His promises and mercy, our repentance and devotion. God will restore the broken. He gives grace to the humble and freedom to the captive.
Learn more about Joanne and her books at joannebischof.com.
This book was provided by WaterBrook Multnomah through their Blogging for Books program in exchange for my honest review.