Review: My Hope Is Found

My Hope Is Found by Joanne Bischof brings the Cadence of Grace series to a sweet and moving conclusion. With its rustic 1900 Appalachian setting, endearing characters, romantic tension, unexpected plot twists, and redeeming grace theme, this series will always be one of my favorites.

After finally finding love with his sweet bride Lonnie, Gideon’s heart was torn when a woman from his past claimed to be his true and rightful wife, forcing him away from his family. God’s merciful hand saw Gideon through the heartache, and with Cassie’s blessing, he is able to return home. Though his journey back through the Blue Ridge Mountains will hold a trial he never anticipated.

Meanwhile, Lonnie determines to seal off her heart from Gideon, convinced he is lost to her forever. Strengthening her resolve to move on is the fondness she has for the handsome Scotsman, Toby McKee—the young reverend she has come to care deeply for. His proposal of marriage offers a bright future for her and her young son.

Yearning to allow joy back into her life, Lonnie must put aside the broken pieces of her heart that still love Gideon. When he returns to find her betrothed to another, he has to place his hope in God, trusting that the One who redeemed their love once can do it again.

Joanne has written a truly inspired series, packed with emotion and romantic tension, and with so much to like about it. First is the richly-drawn characterization of Gideon and Lonnie. When we meet them in book 1, Be Still My Soul, Gideon O'Riley is a 22-year-old bluegrass musician - confident, passionate, and not altogether a good guy. Lonnie is a shy and pensive young lady with a sweet voice, pretty, the brown-eyed wallflower of Rocky Knob, Virginia. She's grown up in the shadow of an alcoholic father and yearns to be free and loved.

It's hard to talk about this book without referring to the whole Cadence of Grace series, because My Hope Is Found is more like the conclusion to a beautiful, redemptive story. Drawn to Lonnie's faith in the God who had given him a second chance, Gideon still found himself ensnared and seemingly trapped by sins of the past. "He didn't deserve forgiveness. He'd stolen Lonnie when she hadn't been his to steal. Then he betrayed her just weeks after he'd betrayed Cassie. He'd orchestrated every desire of his heart into being without ever weighing the consequences." Yet this story opens with Cassie's words to Gideon, "Go home to them."

The term "cadence" describes a melodic progression that creates a sense of resolution or completion, and I think that expression fits this series so well. A weak cadence indicates a momentary pause, while a strong cadence signals the end or completion. The endings of books 1 and 2 were mere pauses, with book 3 reaching a tender and moving conclusion through the grace and kindness of God.


I loved the scene where Gideon remembered and played a hymn from his childhood on the mandolin without understanding its meaning:  It Is Well with My Soul. When asked what the lyrics meant to her, Lonnie replied, "I think it means a peace. The feeling of resting in God's goodness. In His comfort. That come what may, it is still well." And that's what Gideon wanted, "the kind of faith that assured him that no matter what happened in life, he would always have peace."

The Cadence of Grace series beautifully illustrates something that we all know by faith - that God sees us, not as we are, but how we can be through Him. Throughout its pages, Lonnie's faith is tested and Gideon gradually comes to know the God of grace and redemption. Any parent who has prayed for God to put people of faith in their prodigal's life - such as the precious older couple, Jebediah and Elsie - will find hope in this story.

When two suitors vie for a young lady's hand, it is rare for me to almost want both to win, but that is exactly the situation Joanne has created here. Readers might suspect or hope for a certain conclusion, but nothing is assured until the final pages - yet it ended in the only way it could have. I might be wrong (but I hope not!) in thinking that Joanne dropped a little hint as to a future story for a couple of characters.

Fans of historical romance will certainly enjoy this series, but I think its appeal reaches beyond that. I don't hesitate to highly recommend My Hope Is Found, as well as the whole Cadence of Grace series, to all readers.

"It’s my desire to write about characters who have nowhere else to go but up. About characters desperate for God’s strength, mercy, and forgiveness.
"My constant prayer is that these stories will bless and encourage you. I pray that they will point to the Cross - the redemptive love of Christ. The One who died for our sins. Though we were so, so undeserving of that kind of sacrifice. The ultimate act of love.
"There is no love story sweeter than that of Christ and His church. It's a dance - a pursuit. I think that is why I write romance. It's a beautiful reflection of that ultimate love. The never-ending story of a hero, holding out his hand to the one he loves. A story of sacrifice. And in the Cadence of Grace series, a story of how a sinner can change, and hope can be found."

Visit Joanne on her website, joannebischof.com, to learn more. Joanne also has a great collection of pictures on her Cadence of Grace Pinterest board. These beautiful images will really help you get a feel for this series, so be sure to visit. 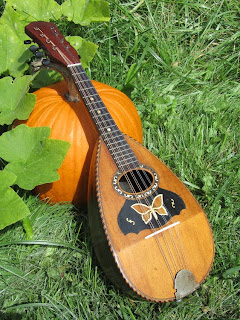 Gideon played It Is Well on the mandolin


I was provided an ARC of My Hope Is Found by Joanne in exchange for my honest review.
Posted by Carole at 7:01:00 PM