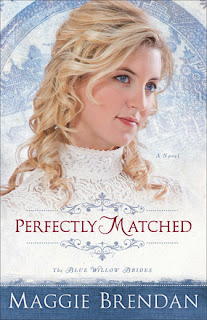 Book #3 in The Blue Willow Brides series by Maggie Brendan


His life runs like clockwork.
Hers is a spontaneous adventure.
But God's timing is always perfect.

Anna Olsen knows it's time to leave her sister's increasingly crowded house and start a life of her own. Following her sisters' examples, she becomes a mail-order bride, and after a short correspondence with clock maker and jeweler Edward Parker, she moves to Denver to become his wife.

Almost immediately it's painfully apparent that Anna and Edward are very different. Anna is a free spirit who would rather be painting and enjoying the company of friends than cleaning house. Edward is a consummate perfectionist who, on their wedding day, hands Anna a list of chores that need to be done around the house daily.

This is the first of Maggie's books that I've read and I thoroughly enjoyed it. Sometimes I just want a book to relax with and that makes me smile, and Perfectly Matched (Revell) did exactly that. Although it concludes a series, this story easily stands alone.

The setting of Denver, Colorado in the fall of 1888 felt very real as many actual places were incorporated, some still standing today. And characterization is strong in both major and secondary characters.

Edward is certainly a unique hero! He suffers from a mild form of what we know today as obsessive compulsive disorder, first evidenced in the humorous scene where, shortly after saying "I do," he presents Anna with a detailed schedule of her daily chores. As frustrating and unbending as he seems at first, knowing his background and understanding that his actions were merely coping mechanisms, I grew to really like him. Edward's father had been an alcoholic, and his sister explains to Anna: "Edward and I both had our ways of coping as children. He liked to tinker with things that took total concentration and perfectionism. I think that was his way of controlling what he could around him, and he became compulsive about certain things."

Anna is completely his opposite, and their marriage a total recipe for disaster without God in the equation. Scatterbrained, impulsive, untidy and disheveled - but with such a giving nature, genuine sweetness, and compassion for others, especially animals in need. "When the Lord places an opportunity to do good right in front of me, then I have to take a stand," Anna explains.

I particularly enjoy romances where love grows between a married couple, and Maggie did an excellent job at portraying this. That intimate moments are a part of Edward and Anna's marriage is obvious, and it's just refreshing to see this included and so tastefully done "off camera."

This story also shows how Edward and Anna, both committed to their marriage, work through personality differences and discover that they actually have much in common and bring out the best in each other. I loved how, as early as their wedding night, Edward "suddenly had a premonition of things to come, and he felt like he was losing control."

Perfectly Matched is a tender, heartwarming romance which includes some interesting history, such as the beginning of the American Society for the Prevention of Cruelty to Animals (ASPCA). I believe this is a book that romance fans will enjoy.

Previous books in this series are Deeply Devoted (1) and Twice Promised (2). 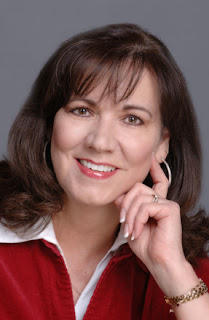 Maggie Brendan is the bestselling author of several books, including the Heart of the West series and The Blue Willow Brides series. She was a 2013 finalist for the Published Maggie Award of Excellence, a 2013 finalist for the Heart of Excellence Readers' Choice Award, a 2012 finalist for Inspirational Reader's Choice award, and a recipient of the 2004 ACW Persistence Award in Atlanta. She is a member of the ACFW; Author's Guild; Romance Writers of America; Faith, Hope, and Love; and Georgia Romance Writers. When she's not writing, she enjoys reading, researching for her novels, and spending time with her family.

For background information and pictures of actual sites referenced in the story, visit the Petticoats and Pistols blog. Learn more about Maggie and her books at maggiebrendan.com.

This book was provided by Lanette Haskins and Revell in exchange for my honest review.
Posted by Carole at 12:40:00 AM