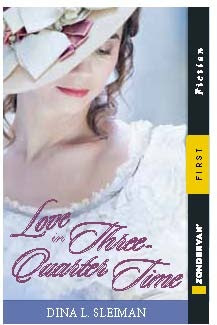 
Love in Three-Quarter Time by Dina Sleiman explores the world of 1817 Virginia.  In her historical notes, Dina describes heroine Constance as "Scarlett O'Hara meets Jane Austen" and the novel as a fusion of Southern plantation, frontier, Native American, and Regency cultures.  Another facet of Dina's writing is that, having served as a dance choreographer and director for sixteen years, she beautifully incorporates the theme of dance, especially as an expression of worship.


When the belle of the ball falls into genteel poverty, the fiery Constance Cavendish must teach the dances she once loved in order to help her family survive. The opportunity of a lifetime might await her in the frontier town of Charlottesville, but the position will require her to instruct the sisters of the plantation owner who jilted her when she needed him most. As Robert Montgomery and Constance make discoveries about one another, their renewed faith in God helps them to face their past and the guilt that threatens to destroy them.


Love in Three-Quarter Time is a fairly light romantic novel.  It is well-researched and brings in historical aspects such as the home of President Thomas Jefferson in Monticello, his daughter Patsy Randolph, and the American introduction of a popular European "scandalous" dance known as the waltz.


The theme of abolition plays a major role in this story, as both Robert and Constance work toward this cause.  Robert expresses his desire to his neighbor, Terrence:  "With corn in the summer and wheat in the winter, I estimate I can produce double the crops with half the labor.  If it works, perhaps others will attempt it and let their slaves go free."


Another interesting character is Lorimer, a circuit-riding, buckskin-clad preacher who plays an important part in Constance's faith journey.  One of my favorite scenes is when she attends Lorimer's Bible meeting with the servants.  "Rich voices surrounding her sang with such depth of emotion, their praises rising to the heavens and meeting God's ears . . . How could they sing of joy when they lived in such bondage?  Yet the expressions of rapture on their upturned faces spoke of a deep and abiding joy, the likes of which Constance had never experienced."  They joyfully sang a chorus which I loved to sing when I was growing up:


Give me joy in my heart, keep me singing
Give me oil in my lamp, keep me burning
Sing hosanna to the King of kings!


The main negative for me is that at times the narrative failed to hold my interest and I was tempted to skip over some sections.  The writing just didn't have that special spark that makes a great book flow and causes you want to read every word.  It was still a solid novel, however, and I expect Dina's ability as a writer will only improve.  There were enough likeable secondary characters for a sequel to be developed.


I recommend Love in Three-Quarter Time to those who enjoy romantic historical fiction with Christian themes.


Love in Three-Quarter Time is the launch title for the new Zondervan First imprint.  For more information on Dina Sleiman and her books, visit her website at http://awesomeinspirationals.blogspot.com/

This book was provided by Zondervan through NetGalley in exchange for my honest review.
Posted by Carole at 3:42:00 PM