Review: Back in the Saddle 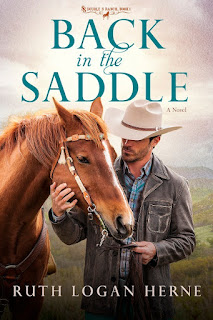 Back in the Saddle
By Ruth Logan Herne
Double S Ranch, #1
Multnomah Books, 2016

It’s been a long time since Colt Stafford shrugged off his cowboy legacy for shiny Manhattan loafers and a promising career on Wall Street. But when stock market manipulations leave him financially strapped, the oldest son of legendary rancher Sam Stafford decides to return to the sprawling Double S ranch in Gray’s Glen, Washington. He’s broke, but not broken, and it’s time to check in with his ailing father, and get his legs back under him by climbing into the saddle again.

He doesn’t expect to come home to a stranger pointing a loaded gun at his chest— a tough yet beautiful woman that Sam hired as the house manager. Colt senses there’s more to Angelina Morales than meets the eye and he’s determined to find out what she’s hiding...and why.

Colt’s return brings new challenges. Younger brother Nick has been Sam’s right-hand man at the ranch for years and isn’t thrilled at having Colt insert himself into Double S affairs. And the ranch’s contentious relationship with the citizens of Gray’s Glen asks all the Stafford men to examine their hearts about what it truly means to be a neighbor. And as Wall Street recovers, will Colt succumb to the call of the financial district’s wealth and power—or finally the courage to stay in the saddle for good?

I am thrilled to have discovered the writing of Ruth Logan Herne, for she has quickly earned a place on my list of favorite authors. I’ve always been drawn to relationship stories and Ruth writes this style extremely well, creating a memorable cast of characters who immediately captured me emotionally. When a series is developed around one family, the first book can sometimes be overwhelming as all the characters are introduced, but Ruth has done one of the best jobs I’ve ever seen in creating a strong family ensemble that readers can very easily connect with.

In a novel that combines inspiration from the biblical Prodigal Son story with a little taste of TV’s Bonanza, Ruth draws us into day-to-day life on the Stafford family’s Double S Ranch in Gray’s Glen, Washington. We see a broken family, headed by a tough, arrogant father who has found Christ and longs to set things right with his sons and the community in the time he has left. Tension is strong as the intricacies of father/son and brother-to-brother relationships are explored. Ruth’s writing flows smoothly and the accurate way she portrays family life captured my attention throughout.

Sam Stafford, a proud man who had built a cattle empire at the expense of his children, had 30 years’ worth of fence mending to do with his sons. The oldest, Colt, “had been wearing bitterness like comfortable shoes.” But what a character! He’s brilliant and intuitive, a lot like his father in both good and bad ways, and it’s great to see him soften gradually as he and Sam grow closer to each other and to God. Angelina, Sam’s household manager, is a strong, sympathetic character who I instantly felt for. Faith and family are everything to her, and she has made a huge difference in the lives of the Staffords. I wish Colt and Angelina could have spent more time together as the story progressed, but she is the perfect counterpart to Colt and there is plenty of romantic tension. One of the most touching scenes was when Colt brought Noah and Isabo, Angelina’s son and mother, to the ranch.

Colt’s brothers add to the complexity of this story and I’m eager to see all that develops with them through the series. Nick, who is trying to raise two precious daughters, doesn’t have an easy time with Colt’s return. Trey is a country music superstar with a strong faith, so there’s lots to anticipate!

I found this description of the brothers’ faith interesting because it is such a true reflection of life . . . “Trey owned his faith. It was clear in his eyes, his countenance, and the folded hands in prayer. Nick tolerated the idea of faith because he was a father and that’s what fathers were supposed to do. Colt fought the idea of handing over his hard-won control to anything or anyone, a true questioner.”

We often see how people can experience the same thing, yet turn out completely different, as with Colt, Nick, and Trey. But I also think these three attitudes can be found in the same person, depending on life’s circumstances – for although my faith is strong, there are times when I have found myself going through the expected motions, and even struggling to give God control.

Back in the Saddle is a moving and complex story of family dynamics and a forgiving God who gives second chances, a 5-star read all the way for me. Highly recommended. 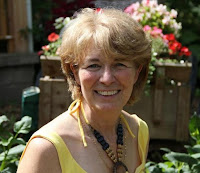 Ruth Logan Herne has more than half a million books in print, including fifteen Love Inspired contemporary novels. Back in the Saddle is the first book in her new western romance series. Ruth is a founding member of Seekerville, a popular writing collective blog. A country girl who loves the big city, Ruth and her husband live on a farm in upstate New York.