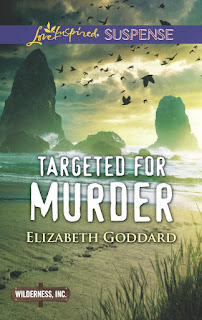 With his dying breath, Hadley Mason’s fatally shot father reveals he’s a CIA agent…and a bounty has been placed on both their heads. Heeding his urgent warning to disappear and trust no one, Hadley flees into the Oregon wilderness, but she can’t shake the string of hired killers on her trail. So when a fearless and too-handsome wilderness guide comes to her rescue, Hadley has no choice but to put her life in Cooper Wilde’s hands. The former Green Beret vows to protect her, but beyond steep gorges and treacherous terrain, a ruthless man will stop at nothing to see her dead.

Sometimes a story has that perfect blend of vivid scenery, appealing characters, edge-of-your-seat action, and tender romance – and that’s how I felt about Targeted for Murder. The writing flows easily, the suspense is almost constant, and I did not want to put this book down.

In the first book of this new series – Wilderness, Inc. – Elizabeth Goddard introduces readers to Oregon’s majestic wilderness landscape and a family that I’m eager to follow. From Oregon’s Wild Rogue Wilderness (an area so remote that mail arrived via boat service) to the Gold Beach coast, setting is vividly conveyed and actually becomes a major character. And it’s against this backdrop that Cooper and Hadley’s story unfolds.

Cooper and Hadley are strong, appealing characters – and they are still in my thoughts. Hadley, a talented artist, is resilient and intelligent. I can’t begin to imagine how I would feel if, like Hadley, the very foundations of life that provided safety and purpose were suddenly ripped away. “She lived her life with purpose – with goals and dreams – and some stranger had taken everything from her when he’d killed her father and now sought to kill her, twisting everything around until her only purpose was to live another day.” I was also fascinated by her ability with the self-defense system, Krav Maga.

Cooper – former Green Beret – is one of my favorite leading men, “an interesting combination of two parts wilderness, one part military background” according to Hadley. Carrying heavy, self-imposed guilt from the past and feeling that he is a disappointment to his father, he has virtually hidden himself away and started a wilderness survival business. I was quickly drawn to Cooper’s lifestyle of righting wrongs, helping those who couldn’t help themselves.

The chemistry between this unlikely couple feels so real as they run for their very lives. In spite of his advanced survival skills and military training, Cooper constantly finds himself playing defense against a hired killer. The narrative pulls you right into the non-stop action, and any breathing space is short lived.

I especially appreciated the spiritual themes woven gently throughout – that faith can’t be taken for granted, that God brings people into our lives rather than coincidence, and that our God redeems. I also loved how this verse from Psalms that Elizabeth quoted at the beginning reflects Cooper’s nature . . . 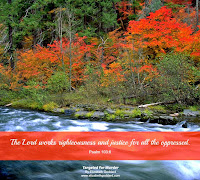 We met Cooper’s brother in this story, Special Agent Grayson Wilde, and I am eager to see more of him. Targeted for Murder is a great read for all who enjoy romantic suspense.

Elizabeth Goddard is the bestselling, award-winning author of more than twenty-five romance novels and counting, including the romantic mystery, THE CAMERA NEVER LIES–a 2011 Carol Award winner. She’s a double finalist in the 2016 Daphne Du Maurier Award for Excellence in Mystery/Suspense for her books BURIED and BACKFIRE in the Mountain Cove series.

A 7th generation Texan, Elizabeth graduated from North Texas State University with a Bachelor of Science in Computer Science and worked in high-level software sales for several years before retiring to home school her children and fulfill her dreams of writing full-time. She currently makes her home in Minnesota with her husband and children.

I received this book free of charge from the author. 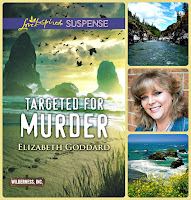