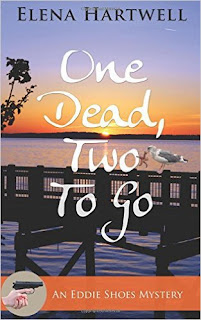 Private Investigator Edwina “Eddie Shoes” Schultz’s most recent job has her parked outside a seedy Bellingham hotel, photographing her quarry as he kisses his mistress goodbye. This is the last anyone will see of the woman… alive. Her body is later found dumped in an abandoned building. Eddie’s client, Kendra Hallings, disappears soon after. Eddie hates to be stiffed for her fee, but she has to wonder if Kendra could be in trouble too. Or is she the killer?

Eddie usually balks at matters requiring a gun, but before she knows it, she is knee-deep in dangerous company, spurred on by her card-counting adrenaline-junkie mother who has shown up on her doorstep fresh from the shenanigans that got her kicked out of Vegas. Chava is only sixteen years older than Eddie and sadly lacking in parenting skills. Her unique areas of expertise, however, prove to be helpful in ways Eddie can’t deny, making it hard to stop Chava from tagging along.

Also investigating the homicide is Detective Chance Parker, new to Bellingham’s Major Crimes unit but no stranger to Eddie. Their history as a couple back in Seattle is one more kink in a chain of complications, making Eddie’s case more frustrating and perilous with each tick of the clock.

It’s been a good while since I’ve read a female PI story and I enjoyed Elena Hartwell’s debut very much. One Dead, Two to Go opens with Eddie on a stake out, hoping to collect evidence of an unfaithful husband, and the ride gets interesting from there.

The story is well written and fast paced, hooking me from the first page, but it was the humor that delighted me most. Eddie (Edwina) is quite a character – and her mother, Chava, even more so. The mother/daughter relationship had been a little dysfunctional in the past, but works well now. Together they make quite the detecting pair.

The mystery itself is well plotted and the suspects aren’t so numerous that you can’t keep up with everybody. The story is told from Eddie’s point of view, which I liked because it enabled me to get to know her fairly well.

One Dead, Two to Go is a fun read. There’s a little mild profanity, but a very entertaining story overall.

After twenty years in the theater, Elena Hartwell turned her dramatic skills to fiction. Her first novel, One Dead, Two to Go introduces Eddie Shoes, private eye. Called “the most fun detective since Richard Castle stumbled into the 12th precinct,” by author Peter Clines, I’DTale Magazine stated, “this quirky combination of a mother-daughter reunion turned crime-fighting duo will captivate readers.”

In addition to her work as a novelist, Elena teaches playwriting at Bellevue College and tours the country to lead writing workshops.