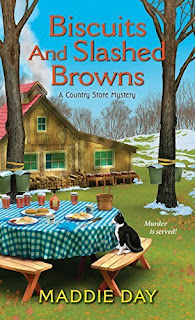 For country-store owner Robbie Jordan, the National Maple Syrup Festival is a sweet escape from late-winter in South Lick, Indiana—until murder saps the life out of the celebration ...

As Robbie arranges a breakfast-themed cook-off at Pans ‘N Pancakes, visitors pour into Brown County for the annual maple extravaganza. Unfortunately, that includes Professor Connolly, a know-it-all academic from Boston who makes enemies everywhere he goes—and this time, bad manners prove deadly. Soon after clashing with several scientists at a maple tree panel, the professor is found dead outside a sugar shack, stabbed to death by a local restaurateur’s knife.

When an innocent woman gets dragged into the investigation and a biologist mysteriously disappears, Robbie drops her winning maple biscuits to search for answers. But can she help police crack the case before another victim is caught in a sticky situation with a killer?

Biscuits and Slashed Browns is an entertaining cozy mystery that has the traditional feel that I enjoy. What could be more appealing than the small-town setting of South Lick, Indiana, where Robbie runs a local diner, and a maple syrup festival? Characters are likeable, the mystery is well crafted, and there are plenty of suspects and plot twists. Although fourth in the series, this story easily stands alone.

The fact that the realistically flawed characters, including Robbie and a strong supporting cast, seem so real makes the story especially engaging. One of my favorites is the young Indian chef, Turner Rao, whose passion for cooking goes against the goals his parents have for him. There’s a conflict between the murder victim and Turner’s father, academics who were on opposing sides of the climate change debate.

It made sense for Robbie to ask questions when some of the suspects had close ties to her, providing a good way for background to be shared. Robbie’s friendship with law enforcement, especially Buck, gave credibility to her involvement in the investigation. I also loved Adele, Robbie’s aunt. Although I wasn’t crazy about the frequent use of local accents, it gave a sense of realness to the story. The only negative was a few instances of mild profanity that detracted from an otherwise clean story.

Maddie Day is a talented amateur chef and holds a Ph.D. in linguistics from Indiana University. An Agatha Award-nominated author, she is a member of Sisters in Crime and Mystery Writers of America and also writes award-winning short crime fiction. She lives with her beau and three cats in Massachusetts.

You can find all Maddie’s/Edith’s identities at www.edithmaxwell.com. She blogs every weekday with the other Wicked Cozy Authors at wickedcozyauthors.com. Look for her as Edith M. Maxwell and Maddie Day on Facebook and @edithmaxwell and @maddiedayauthor on Twitter.