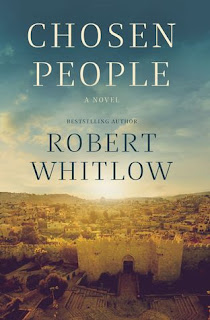 Bestselling author Robert Whitlow dives deep into the legal ramifications of a tragic event half a world away and how it affects two lawyers in Atlanta from vastly different backgrounds.

When Hana Abboud walked into the conference room, she was unprepared for the images of a horrific terrorist attack near the Western Wall in Jerusalem. But after watching a courageous mother sacrifice her life to save her four-year-old daughter, Hana knew she needed to help attorney Jakob Brodsky represent the family’s pursuit of justice against those who perpetrate acts of violent jihad. As an Arab Israeli lawyer trained at Hebrew University, Hana is uniquely qualified to step into the gap. But they need a third partner, an investigator on the ground to help them unravel the snake pit of connections between the terrorists and an organization or company that can be sued in the American courts. Hana returns home to Israel and meets with investigator Hamid Hasan who quickly becomes more than a crucial part of the litigation team.

As Jakob and Hana investigate the case in the US, he is stalked on the streets of Atlanta by affiliates of a terrorist organization. Their pursuit of truth can only be resolved where it began: the streets of Jerusalem. But who can they trust? How deep does deceit go? Can two lawyers and a shadowy investigator impact the kind of violence and terror that has become common in our broken world?

Chosen People is the first of Robert Whitlow’s books that I’ve read, and it is impressive. I obviously can’t compare it to his previous books, but I understand that with its backdrop of Islamic terrorism, the theme and pacing are different. Chosen People is well written, suspenseful and entertaining, but also relevant and compelling.

I was intrigued by Hana Abboud, a Christian Arab Israeli working in an Atlanta law firm. That combination of faith and nationality is something I had never thought about. In Hana’s words, “More and more Christian Arabs, especially in my generation, identify as Israelis even though we’re not Jewish.” Whitlow’s passion for the subject matter and knowledge of the Middle East is off the charts, and one of this book’s strengths is all that I learned. I thought I had a decent understanding of the Middle East, but Whitlow’s writing opened my mind up to a new awareness and clarity. From that standpoint alone, I’d like to read this book again, just to see what I might have missed and take in even more.

The idea of bringing a lawsuit to hold the perpetrators of terrorism accountable is also intriguing, and might also be a dangerous undertaking. The danger started on American soil, then picked up dramatically once the characters reached the Middle East. Suspense runs high and it’s not obvious who can be trusted. I recommend not even trying to figure it out, because you just might be shocked at the end. Young Sadie, daughter of a victim who sacrificed her life for Sadie, captured this reader’s heart. There’s also a romantic thread that I enjoyed.

The diversity of faith and cultures – Christian, Jewish, Muslim – made the story so realistic. Hana’s love for the Lord and her spiritual witness is truly inspiring; her way of praying often puts me to shame. And in thinking of God’s chosen people, even through complexity and grittiness, Whitlow imparts so much to reflect upon.  Even if this book isn’t in the style you usually enjoy, it is well worth reading.

Robert Whitlow is the bestselling author of legal novels set in the South and winner of the Christy Award for Contemporary Fiction. He received his J.D. with honors from the University of Georgia School of Law where he served on the staff of the Georgia Law Review.

Chosen People—a title that reflects both the Biblical designation for the Jewish nation as well as converted Christians—opens during a terrorist attack near the Western Wall in Jerusalem. A courageous mother sacrifices her life to save her young daughter, leaving behind a grieving husband and a motherless child.

Whitlow’s many trips to Israel and his in-depth research into the culture and laws of the Holy City are evident throughout the story. Furthermore, his experience as a lawyer gives him keen insight into the mind of his main character Hanna Abboud, an Arab Christian Israeli lawyer working in Atlanta.

“This book provides a unique perspective to this region and its peoples through the eyes of an Arab Christian who believes that the faithfulness of God and truths of the Bible are unshakable realities,” says Whitlow. “This viewpoint is rarely expressed, yet it is one that needs and deserves to be heard so that it can become part of our framework for understanding this vital part of the world and the people who live there.”

To celebrate his tour, HarperCollins is giving away a grand prize of three finished Robert Whitlow books (to be chosen by the publisher)!!