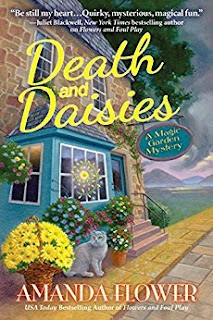 Florist Fiona Knox left behind her gloomy life for a magical garden in Scotland, but a murder on her shop’s opening day spells doom.

Fiona Knox thought she was pulling her life back together when she inherited her godfather’s cottage in Duncreigan, Scotland—complete with a magical walled garden. But the erstwhile Tennessee flower shop owner promptly found herself puddle boot-deep in danger when she found a dead body among the glimmering blossoms. One police investigation later (made a trifle less unpleasant by the presence of handsome Chief Inspector Neil Craig), and Fiona’s life is getting back on a steady, though bewitched, track. Her sister Isla has just moved in with her, and the grand opening of her new spellbound venture, the Climbing Rose Flower Shop in Aberdeenshire, is imminent.

But dark, ensorcelled clouds are gathering to douse Fiona’s newly sunny outlook. First, imperious parish minister Quaid MacCullen makes it undeniably clear that he would be happy to send Fiona back to Tennessee. Then, a horrific lightning storm, rife with terribly omen, threatens to tear apart the elderly cottage and sends Fi and Isla cowering under their beds. The storm passes, but then, Fi is called away from the Climbing Rose’s opening soiree when Kipling, the tiny village’s weak-kneed volunteer police chief, finds a dead body on the beach.

The body proves difficult to identify, but Kipling is certain it’s that of the parish minister. Which makes Fiona, MacCullen’s new nemesis, a suspect. And what’s worse, Isla has seemed bewitched as of late…did she do something unspeakable to protect her sister? The last thing Fiona wanted to do was play detective again. But now, the rosy future she’d envisioned is going to seed, and if she and Craig can’t clear her name, her idyllic life will wilt away in Death and Daisies, national bestselling author Amanda Flower’s second enchanting Magic Garden mystery.

Death and Daisies is a wonderful cozy mystery, book #2 in an equally wonderful series by the talented Amanda Flower. After reading the previous story, Flowers and Foul Play (click on title to see my review), this series has become a “must read” for me. Setting, characterization, and storyline all combine in a flowing narrative that is difficult to put down. Amanda Flower has also written other series that I hope to eventually read.

A good foundational background is provided so that Death and Daisies can stand alone, but turning to the first page feels like coming home to a beloved village and its sometimes quirky characters. Scotland … what can I say but that there’s just something special about Scotland and its people. For Fiona Knox, new business owner of the Climbing Rose Flower Shop in Aberdeenshire, it’s all about friends like Raj and his sister Presha, Hamish MacGregor, and Chief Inspector Neil Craig. I adore the slowly simmering romance between Fiona and Neil, subtle and very well done.  This story also brings Fiona’s sister, Isla, into the mix, creating even more drama.

The mystery itself is well crafted and believable, but best of all is the rich characterization. Rather than taking second place to the mystery, character development is strong and foundational to the storyline, which elevates this story even more. I also loved how secondary characters and suspects alike are introduced one at a time so as not to be confusing, and this gives readers time to get to know them. Paranormal elements involving the magic garden, of which Fiona is now the caretaker, aren’t featured as prominently as in the previous book, yet this garden is at the heart of everything.

Death and Daisies is an engrossing story, a clean read, and I recommend it highly. “Best of the best” for me. May this series continue for a long time! 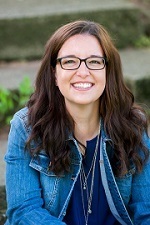