Review: The Edge of Mercy by Heidi Chiavaroli 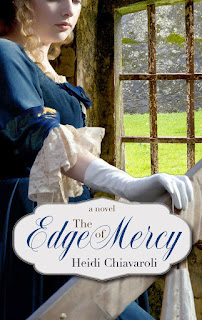 The Edge of Mercy
By Heidi Chiavaroli

Two women, three hundred years apart, must face the devastation of all they hold dear...

Suspecting her husband is having an affair, Sarah Rodrigues fights to appear unbroken while attempting to salvage her family. Though distracted by her own troubles, Sarah is summoned to an elderly friend’s deathbed for an unusual request—find a long-lost daughter and relay a centuries-old family story.

Determined not to fail her friend, Sarah pieces together the story of her neighbor’s ancestor, Elizabeth Baker, a young colonist forced into an unwanted betrothal but drawn to a man forbidden by society.

While Sarah’s family teeters on the edge of collapse, her world is further shaken by the interest of a caring doctor and a terrible accident that threatens a life more precious than her own.

Inspired by the unconditional love she uncovers in Elizabeth’s story, Sarah strives to forgive those who’ve wounded her soul. But when light shines on the dark secrets of her neighbor’s past and the full extent of her husband’s sins, will looking to a power greater than herself rekindle lost hope?

Quite simply, The Edge of Mercy is exquisite. Powerful, emotional, poignant, unforgettable. Worthy of my “best of the best” shelf.

I’m kicking myself for not having discovered Heidi Chiavaroli’s books before now, for she sets her stories in my favorite era, that of Colonial America through the Revolution. The Edge of Mercy has a dual timeline, Sarah and Matt in the present day, and that of Elizabeth, Abram and Caleb in 1675 told through Elizabeth’s journal. It’s the story of a troubled marriage that began on a shaky foundation, a marriage on the brink of failure, and the author skillfully handles elements like premarital sex and infidelity.

I think what makes this story so special and impactful is that it is inspired by personal events. Heidi writes: “All books have a piece of my heart, but this book…I don’t know, it feels especially personal. Maybe because it’s set in my hometown. Maybe because it explores the intricacies of marriage. Maybe because it was from watching my parents struggle—and conquer—their own marriage troubles for a lot of my growing up years that this book was able to be told from an especially authentic place.”

The story of Elizabeth’s family imparts a far-reaching legacy with the power to effect lasting change. Sometimes we learn best by being shown what real, sacrificial love is. And as for those impossible-to-forgive circumstances, that’s where God’s grace enters in. I think we all share a thankfulness that with God, there are no impossible circumstances, and that He gives us supernatural grace to extend the same.

The Edge of Mercy is an engrossing and compelling novel. It just doesn’t get any better than this!

Heidi Chiavaroli began writing twelve years ago, just after Jesus had grabbed hold of her heart. She used her two small boys’ nap times to pursue what she thought at the time was a foolish dream. Despite a long road to publication, she hasn’t stopped writing since!

Heidi won the 2018 ACFW Carol Award for Debut Novel and is a 2018 Christy Finalist. Both her debut novel, Freedom’s Ring, and her sophomore novel, The Hidden Side, are 4½-star Romantic Times Top Picks. Freedom's Ring was also a Booklist Top Ten Romance Debut.

Heidi loves exploring places that whisper of historical secrets, especially with her family. She loves running, hiking, baking, and dates with her high-school sweetheart and husband of fifteen years. Heidi makes her home in Massachusetts with her husband and two sons.