Review + GIVEAWAY: Died in the Wool by Melinda Mullet 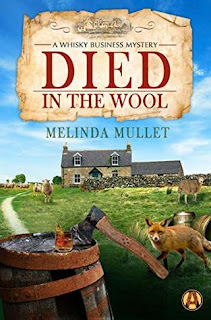 Died in the Wool
By Melinda Mullet
A Whisky Business Mystery #4
Alibi, 2019

Photojournalist Abi Logan is finally ready to put her hectic career on hold and set down roots in the heart of the Scottish countryside. Studying the business and art of distilling whisky at Abbey Glen and volunteering at the Shepherd’s Rest women’s shelter in her spare time seem a surefire way to find the peace and stability she craves. It’s also the logical way to take her mind off her personal life. Abi’s business partner, Grant MacEwan, is facing a career-threatening disability, and as much as Abi longs to be there for him, he seems to prefer the company of a rival.

But as Abi becomes more involved with Shepherd’s Rest, she discovers that their refuge is elusive. When the shelter is rocked by a murder/suicide, Abi is outraged by the police’s lack of attention to these already marginalized women. Increasingly confident in her own skills as an investigator, Abi steps in to find out what the police will not: who left one young woman dead and another missing. But when more deadly deeds come to light, Abi must race to unravel the connections between the shelter’s benefactors and the women they have pledged to protect—and expose the killer before he strikes again.

This cozy mystery series by Melinda Mullet is quickly becoming one of my very favorites and Died in the Wool is the best story yet. All four books are wonderful, but I had a special connection with this one.

First of all, what’s not to love about a Scottish setting? Whether it’s the city of Edinburgh or rural setting of Abbey Glen, the author conveys the atmospheric setting beautifully. Secondly, don’t be turned off by the fact that this series is about a family whisky business because it’s so much more. “Rich” is how I would describe this story – rich in characterization and complexity of storyline.

Each story stands alone, but reading in order gives a much more satisfying experience because you gain a familiarity with the series characters and their growth. Grant is back, struggling with an injury from the end of the previous novel that threatens the very essence of his work as Abigail’s business partner. Abi begins to realize the depth of her feelings for Grant, but is it merely because of another woman’s presence?

With her photojournalist background and caring nature for those in need, Abi is a strong, compelling and oh-so-appealing lead character. And I love her collection of 20 Cheviot sheep that she rescued from the slaughterhouse! “Everyone finds their own Zen. Mine walked on four hooves and bleated.” The sheep are actually the driving force in this story, because their need to be sheared leads Abi to Amanda’s knitwear shop, where half of her profits help fund the Shepherd’s Rest, a retreat for abused women. She soon becomes a board member, surrounded by people whose passion should be in helping these women, but all is not as it seems – especially when murder rears its ugly head.

Died in the Wool had a strong emotional connection for me and I cannot say enough good things about it. There’s a poignancy and complexity to both characters and mystery storyline, making it hard to put down, yet not wanting the story to end at the same time. Died in the Wool, as well as the whole series, is an outstanding novel that is a cut above other stories in this genre. 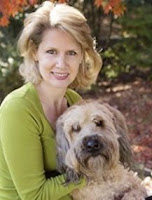 Melinda Mullet was born in Dallas and attended school in Texas, Washington D.C., England, and Austria. She spent many years as a practicing attorney before pursuing a career as a writer.
Author of the Whisky Business Mystery series, Mullet is a passionate supporter of childhood literacy. She works with numerous domestic and international charities striving to promote functional literacy for all children. She lives in Washington, D.C., with her family.