Review + GIVEAWAY: Knot on Her Life by Mary Marks 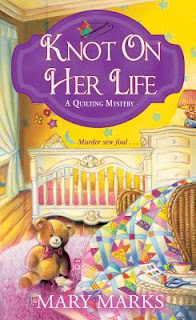 Knot on Her Life
By Mary Marks
A Quilting Mystery #7
Kensington, 2019

While quilter Martha Rose awaits the birth of her granddaughter, a neighborhood girl appears at her door with a mystery that can’t be pinned down . .

Martha’s eager to finish the baby quilt she’s making for her new granddaughter, but she scraps those plans when a young girl rings her doorbell begging for help. Poppy Halaby, the foster child of Martha’s neighbor, is an orphan whose parents were murdered by a killer who was never caught.

When Poppy’s doting foster mom falls suspiciously ill, Martha is determined to keep the child safe. But she’ll have to unravel more about Poppy’s parents to stitch a broken family back together again—and prevent another crime cut from the same cloth . . .

The Quilting Mysteries by Mary Marks center around the thoroughly likeable quilter Martha Rose, who is much more than a lady who quilts. She’s a thoughtful, intelligent, and talented middle-aged lady who cares about her family and sometimes quirky friends – and when murder touches any of their lives, that protectiveness and intuitiveness kicks into overdrive. The characters are richly developed, there’s lots of family drama, and the mystery is complex. Every book I’ve read in this series is very good, but Knot on Her Life just might be my favorite so far. It can definitely stand alone, but I recommended reading the stories in order for their character development.

The suspense begins when Poppy (Marigold Poppy Sarah Halaby), the foster child of Martha Rose’s neighbor, comes seeking help after finding Sonia in a diabetic coma, which might not be as straightforward as it seems at first. Poppy is the daughter of a Muslim father and Jewish mother, and it is soon discovered that she possibly witnessed her parents’ murder. With Poppy and Sonia whisked off into witness protection, Martha Rose begins to seek answers from relatives on both sides of Poppy’s family, as well as through the law enforcement connections of her fiancé, ATF agent and “gentle giant” Yossi, and son-in-law, Noah. I loved the growing relationship between Martha Rose and Yossi, and am crazy about her half-sister, Giselle, who has no filter when it comes to speaking her mind.

One of my comments about a previous book was that, although Martha Rose was Jewish, nothing was shown of her faith or lifestyle, and I loved how that was fleshed out in this book. We learn a lot about Jewish culture and religious rituals – especially the Shabbat, or Sabbath dinner – and some Muslim traditions also, all seamlessly woven into the texture of the story. The theme of being respectful of other people’s religious beliefs is something I appreciated. The only thing I didn’t understand is, with Martha Rose and Yossi being devout in their faith, why they live together without marriage, but that’s just me.

I also loved how the fellowship of quilting – “Women helping women. A sisterhood as old as the species” – is such an integral part of the story, especially the way Poppy opened up and came to trust Martha Rose through the sharing of this art.

Another strong theme is that of legalism vs. grace, and I loved these words spoken by Martha Rose to Rabbi Katzenozen: “You may be the world’s greatest authority on Jewish law … but from what I’ve seen, you don’t know the first thing about the spirit of the law, which is compassion and the preservation of life. For all living things. Including your own flesh and blood.”

The mystery itself is well crafted, the final revelation logical but unsuspected by me. I welcomed the surprise twists and could never figure out if the murder of Poppy’s parents was religious driven or related to her dad’s undercover work with the FBI. And then there’s the question of Poppy’s future, as adoption is sought by three different families. While the solution might not have been what my heart wanted, it was a wise and legally ethical decision, and she will be loved. I don’t know if we’ll see more of Poppy in future stories, but I certainly hope so. Meanwhile, the ending sets the stage for another child in need to enter the lives of the delightful Sonia and her new intriguing husband, Malo.

I highly recommend Knot on Her Life, as well as the whole Quilting Mysteries series.

Born and raised in Los Angeles and the San Francisco Bay Area, Mary Marks earned a B.A. in Anthropology from UCLA and an M.A. in Public Administration from the American Jewish University in Los Angeles. In 2004 she enrolled in the UCLA Extension Writers Program.
Her first novel, Forget Me Knot, was a finalist in a national writing competition in 2011. She is currently a reviewer of cozy mysteries for The New York Journal of Books at www.nyjournalofbooks.com.