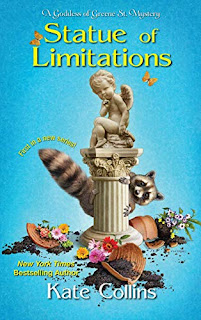 Statue of Limitations
By Kate Collins
A Goddess of Greene St. Mystery #1
Kensington, 2020

In this delightful new series by the New York Times bestselling author of the Flower Shop Mysteries, Athena Spencer comes back home to work with her crazy big Greek family at their garden center. But she never expected a return to her roots would mean protecting her family from murder...

After her divorce, Athena has returned to coastal Michigan to work in her family’s garden center and raise her son, while also caring for a mischievous wild raccoon and fending off her family’s annoying talent for nagging. Working alone at the garden center one night, Athena is startled by a handsome stranger who claims to be the rightful owner of a valuable statue her grandfather purchased at a recent estate sale.

But she has even bigger problems on her plate. The powerful Talbot family from whom her pappoús bought the statue is threatening to raze the shops on Greene Street’s “Little Greece” to make way for a condo. The recent death of the family’s patriarch already seemed suspicious, but now it’s clear that a murderer is in their midst. Athena will have to live up to her warrior goddess namesake to protect her family from a killer and save their community from ruin...

I enjoyed the previous series by Kate Collins, Abby Knight’s Flower Shop Mysteries, and can say that she has created another delightful series that begins with Statue of Limitations. There’s so much to like – the coastal Lake Michigan setting, the quaint stores and community of Sequoia, a larger than life Greek family, and Athena herself. The family members are appealing, funny, caring, and a little crazy, which makes them all the more endearing. I especially enjoyed the sister named Delphi and would love to know her better.

Having returned to Sequoia after a divorce, Athena works in her father’s garden shop, where the plot centers around the questionable origins of a Greek statue and a mysterious stranger named Case. The chemistry between Athena and Case is wonderful and a romance is definitely brewing. The story’s pacing is steady and builds as Athena investigates two murders in an effort to prove Case’s innocence.

The mystery is well crafted and kept me eagerly turning pages. Tension arises as the powerful and controlling Talbot family moves forward with plans to tear down the Greek shops on Greene Street and build a condo complex. The seemingly accidental death of Talbot Sr., who had decided not to raze the Greek section, arouses Athena’s suspicions when his assistant is murdered. I wasn’t all that surprised at the revelation of guilt, but it was so much fun getting there!

Athena’s Greek blog adds a spark to the story – a blog which her family reads religiously and adores, but has no idea who writes it and fails to see themselves in the descriptive characters. Statue of Limitations is a delightful mystery and I am eager to spend more time with this family. The only negative for me was the totally unnecessary use of mild profanity, which lessened my enjoyment. A clean read otherwise. 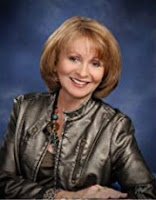 Kate Collins is the New York Times bestselling author of the Flower Shop Mystery series. After publishing numerous historical romances, Kate penned the long-running mystery series, three books of which were made into Hallmark movies starring Brooke Shields.
An Indiana native, Kate graduated from Purdue University with a master’s degree in education. When not growing roots at her computer, Kate loves to garden. Other passions include yoga, reading, spending time with family and friends, sampling great wines and fine dark chocolate, and enjoying every moment of life.
Kate lives in Northwest Indiana and Key West, Florida. Visit her online at KateCollinsBooks.com.