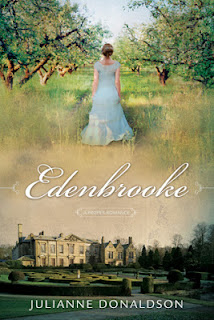 Edenbrooke by Julianne Donaldson  is a delightfully heartwarming romance set during the Regency era. While influenced by Jane Austen and Georgette Heyer, Julianne has found her own voice in a novel that is pure entertainment, and I eagerly await her next novel.


Marianne Daventry will do anything to escape the boredom of Bath and the amorous attentions of an unwanted suitor. So when an invitation arrives from her twin sister, Cecily, to join her at a sprawling country estate, she jumps at the chance. Thinking she’ll be able to relax and enjoy her beloved English countryside while her sister snags the handsome heir of Edenbrooke, Marianne finds that even the best laid plans can go awry.


From a terrifying run-in with a highwayman to a seemingly harmless flirtation, Marianne finds herself embroiled in an unexpected adventure filled with enough romance and intrigue to keep her mind racing. Fate had something other than a relaxing summer in mind when it sent Marianne to Edenbrooke.


To put it quite simply, I loved Edenbrooke and hated to turn the last page. It was a well-written, clean Regency romance filled with humor and romantic tension. I was a little in love with Philip myself!


In many romance novels, the protagonists meet, argue, separate, then come together at the end. But in Edenbrooke, Philip and Marianne spend a lot of time together and show a real affection for each other. Their romance begins as friendship, with the enjoyment of being in each other's company, before it grows into something more. There was a strong chemistry between them from the beginning, and Philip was an especially engaging hero with his kindness, compassion, and humor.


It is quite refreshing to see an ABA novel that is so clean and pure, which shows that a successful romance doesn't have to have sensual elements in order to entertain. When asked what she thought Jane Austen would say about the romance genre today, Julianne responds:


"I think she would be shocked at what can be written and published in a novel today, considering the innocent nature of her novels. I also think she would be surprised that her writing sparked an entire genre of literature. And - this is strictly my own opinion, of course - I imagine she would wish for more elevating love stories and less of a focus on lust in today's romance novels."


Julianne writes at the end:  "I must acknowledge that I could not have written this book without God's help and His generous gifts. I hope that He is pleased."


I found Edenbrooke to be a delightfully fun read, well written and satisfying in its romantic elements. A 5-star read for me because I enjoyed it so much and plan on reading it again. Highly recommended to fans of historical romances. 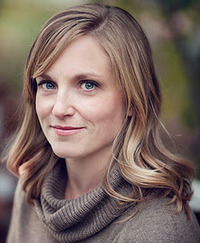 Julianne Donaldson
For more information about Julianne and her novels, visit her website at juliannedonaldson.blogspot.com. Her next book, Blackmoore, is scheduled for release in September 2013.
Posted by Carole at 2:08:00 AM