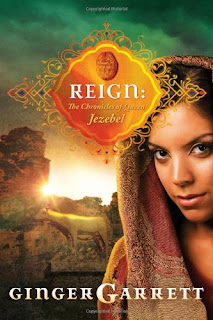 Mesmerizing, gripping, haunting . . . These are just a few adjectives that come to mind when attempting to describe Reign: The Chronicles of Queen Jezebel by Ginger Garrett. Reign presents a captivating portrait of the complex woman who was Israel's infamous queen, told in 1 Kings 16-22.


From the moment her marriage to prince Ahab thrusts her into the intrigues of palace life, Jezebel’s exotic beauty opens doors and her will breaks down walls. Torn from her homeland and wed to power in a strange country, Jezebel vows to create a legacy and power all her own. Some might call her a manipulative schemer, bent on having her way. But they don’t know the whole story, and she was much, much worse.


As she moves through the halls of power, her heart struggles between devotion to the gods she worships, the prince who loves her, and her thirst for revenge. She sparks a battle between her strangely powerless gods and the God of palace administrator Obadiah—a God who confronts her with surprising might. She will fight, though victory may cost her everything.


"Jezebel held her sister by the shoulders at the edge of the fire pit. Priests surrounded her, dancing and calling to the goddess, their red robes stirring the dust, raising a filthy veil around them. . . . Jezebel let her sister go."


With Jezebel's sacrifice of her twelve-year-old twin sister to the Phoenician goddess Asherah, Ginger begins the story of an evil, abhorrent character and pulled me into a story that I could hardly put down.


The story is told through three voices: Jezebel and Ahab, who were united in a political marriage that was beneficial to both Phoenicia and Israel, but forbidden by God - and Obadiah, a Hebrew palace administrator, whose purpose was "to bear witness in evil days, and yet believe that the Lord was good." But they're really just minor characters in a story that is all about Yahweh and Baal.


Ginger has done her research well and doesn't shy away from painting a vivid picture of Phoenician Baal worship and its growing hold on Israel through Jezebel's power and influence. "Who could believe that a prosperous people living in freedom and beauty could murder their infants, could whore their youngest women, could worship demons and drink blood?"


One thought kept entering my mind as I read, and that is how much the events recorded in 1 Kings mirror our times. Plurality of gods, tolerance, desensitization to sin, killing of unwanted infants? Just look at some of the characters' words and thoughts:


-- Jezebel: "We call our gods by different names, but do we not all want the same thing?" And mosaics on the temple floor honored all gods, not just Yahweh.
-- In reference to the sacrifice of infants:  "What had seemed so unnatural and evil the first time she had witnessed it had become good and right to her over time."

-- Obadiah:  "These temples would always stand, somewhere, whenever people preferred pleasure to truth."


The story of Elijah and the priests of Baal on Mt. Carmel is told beautifully in this novel. In the words of one of the Hebrew men: "God's love rages as fiercely as His anger, and He will not suffer long one who leads His children into danger. He moves among us and will not long be silent."


Ginger is known for creating novels and nonfiction resources that explore the lives of historical women, and I am eager to read more of her work. Reign rises above the biblical fiction genre and I highly recommend it to all readers. 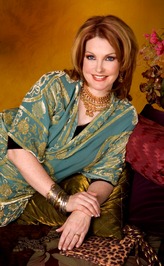 Ginger Garrett
Reign is technically the prequel for the novel Dark Hour, the story of Jezebel's notorious daughter, Athaliah, in 2 Chronicles 21-23. To learn more about Ginger and her books, visit gingergarrett.com.
Reign was provided by David C. Cook through BookFun.org in exchange for my honest review.
Posted by Carole at 4:20:00 PM