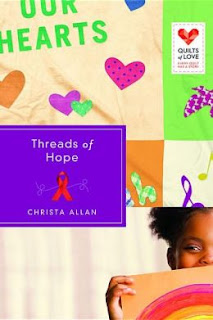 Threads of Hope by Christa Allan is part of the Quilts of Love series published by Abingdon Press. Quilts tell stories of love and loss, hope and faith, tradition and new beginnings - and this series focuses on the women who quilted all of these things into their family history. This novel does a good job in its focus on the AIDS Memorial Quilt, giving both history and some of the stories behind it.

Passed over for promotion and dumped by her boyfriend, Nina O’Malley is further frustrated when her editor assigns her one of the “soft” stories she despises—covering a gala benefit supporting the AIDS Memorial Quilt. More determined than ever to prove she deserves a promotion to the NY office, Nina decides to write a series featuring a local quilting group raising money for AIDs research.

At the event, she runs into her high school nemesis: Greg is a widower and the adoptive father of Jazarah, an HIV positive girl from Ethiopia. Unlike Nina, Greg has faith in a loving God, and he trusts in God’s plan for his life.

Greg and Nina grow closer, and as Nina interviews the quilt families, she begins to question the choices she has made and her lack of faith. Nina suddenly finds herself facing two possible dreams, two paths for her life. 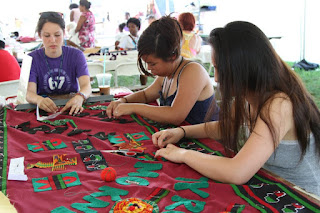 Threads of Hope almost starts out like chick lit, but quickly goes into something much deeper. The lead characters of Greg and Nina are nicely drawn, and Greg's adopted daughter, Jazarah, is precious. Jazarah would face some difficult issues as an HIV positive child, but she was brought up with the conviction that nothing could sway God from loving her.

Greg and Nina were both shaped by painful events in their past, and their reactions couldn't have been more different. For Nina, "It wasn't so much that she gave up on God. She just chose not to give in to Him" ... whereas Greg "learned that he could find comfort in the arms of a God who knew grief."

Nina gets involved with a quilting group's stories, although not with the purest of motives, and it is fun to watch her character's growth. Eventually Nina comes to the point where she has to make a choice between the desires of her heart and the desires of her ego. 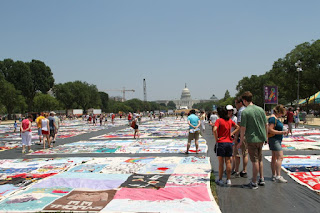 The main star of this novel is the AIDS Memorial Quilt, and I applaud Christa for writing a story that brings it to readers' attention. The quilt, conceived in 1985, weighs 54 tons and consists of over 47,000 panels. In 1996, it covered the entire National Mall in Washington, D.C., and visitors to the quilt number over eighteen million. But the real emotional impact comes from the men, women and children whose lives are memorialized in these quilt panels. Christa does a beautiful job in their telling. 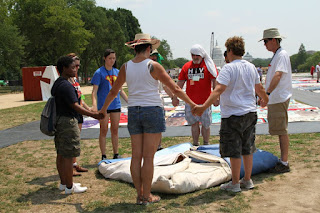 Christa uses a powerful quote that I wanted to share, from Corrie ten Boom, a Christian woman who'd been a prisoner in a Nazi concentration camp: "Forgiveness is to set a prisoner free, and to realize the prisoner was you."

Helpful resources are provided at the end: discussion questions, detailed instructions for making a panel for the quilt, and information about the quilt organization.

I recommend Threads of Hope to all who enjoy inspirational fiction. You don't have to know anything about quilting to enjoy this story. 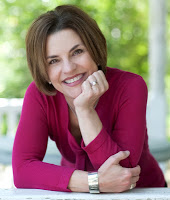 This book was provided by Abingdon Press through NetGalley in exchange for my honest review.
Posted by Carole at 9:44:00 PM