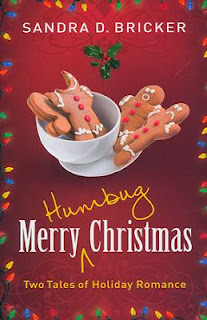 Merry Humbug Christmas features two holiday romance novellas from hilarious and heartwarming author Sandra D. Bricker. -- the perfect gift to yourself or someone else at this most wonderfully stressful time of year.

In "Once Upon a Jingle Bell," A Bah! Humbug cruise to the Mexican Riviera is Joss Snow’s answer to this year’s quest to avoid the holidays completely; at least until she’s rebooked on a different kind of cruise altogether. Candy canes, holly wreaths, reindeer and ornaments seem to be stalking her on the 12 Days of Christmas holiday cruise extravaganza. An escape back to land is her only goal . . . until she meets a kindred spirit in rugged Irishman Patrick Brenneman, and then the game is on! Avoid Christmas festivities at all costs . . . except maybe for that one stop under the mistletoe.

In "It Came Upon a Midnight Deer," Reese’s guilt over abandoning best friend Joss on their holiday tradition of avoiding all things Christmas is trumped by the joy of her recent engagement. Meeting Damian’s family for the first time on idyllic Sugarloaf Mountain is about as far from that Bah! Humbug cruise as she can get, and Reese can hardly wait to get there. But from the moment they hit that deer in the road just two miles from the cabin, everything seems to go wrong. There are no drummers drumming or pipers piping this particular year! And once she sets her future in-laws’ family cabin ablaze, she’s pretty sure there won’t be even ONE golden ring in her future.

This was the first of Sandra's books that I've read and I thoroughly enjoyed it. Merry Humbug Christmas is full of humor and the characters were unpretentious, quirky and loveable at the same time - real people you could meet in everyday life.

This is a story about Christmas and family, and that's a winning combination with me. The secondary characters of Patrick's mother and Damian's extensive family are delightful. Yet there is a bittersweet element, as both Joss and Reese felt like observers when it came to celebrations. Joss "couldn't manage more than the role of simple observer, never a participant" and Reese "felt as if she stood on the outside, looking through a frosted window at the joy and celebration inside." But all that is about to change, with much laughter and joy.


Christmas can be a difficult time for many people, and Sandra created an interesting vehicle with the way Joss and Reese partnered up to avoid all the trappings of celebration each year. I was particularly drawn to Patrick, a man whose deep spiritual convictions made an impact on Joss:  "She wasn't sure she'd ever known a man who openly prayed, and she wondered what it must be like to have such a cemented foundation of faith and reverence for something so clearly . . . unclear."

Humor is one of Sandra's strengths, evidenced by the picture at the bottom of this post, and there were several laugh-out-loud moments. Joss and Patrick doing karaoke, for instance - and Reese's whole thing with the deer. 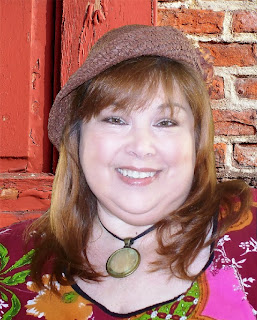 Sandra writes:  "Merry Humbug Christmas began with Joss' story . . . which was based on my own history. I ran out of familial ties several years ago, so I've spent a lot of holiday seasons feeling like I was on the outside looking in at all the happy families. I found a friend who understood (like Reese), and it became a sort of game for us to finger-shoot Santas and avoid Christmas carols and shopping malls. I thought it would be funny to write something based on that . . . and then Reese (who was a minor character in the original full-length book) just cried out for her own side of the story. BAM! Humbug was born."

Sandra has a second Contemporary Fairytale coming out in the spring - inspired by Sleeping Beauty and called Rise & Shine. And she is currently working on the first of a three-book series called Under the Rainbow for Abingdon Press, On a Ring & a Prayer. This book was provided by B&H Books through NetGalley in exchange for my honest review.
Posted by Carole at 11:36:00 PM