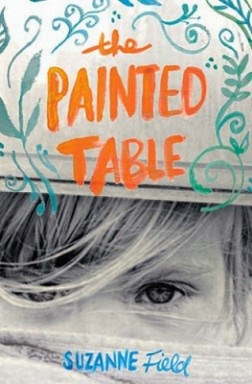 A beautiful heirloom ingrained with family memory has become a totem of a life Saffee would rather forget—a childhood disrupted by her mother’s mental illness.

Saffee does not want the table. By the time she inherits the object of her mother’s obsession, the surface is thick with haphazard layers of paint, and heavy with unsettling memories.

After a childhood spent watching her mother slide steadily into insanity, painting and re-painting the ancient table, Saffee has come to fear that seeds of psychosis may lie dormant within her. But as an adult with a family of her own, Saffee must confront her mother’s torment if she wants to defend herself against it.

Traversing four generations over the course of a century, The Painted Table is an epic portrait of inherited memory, proclivity, and guilt. It is a sprawling narrative affirmation that a family artifact—like a family member—can bear the marks of one’s entire past . . . as well as intimations of one’s redemption.

The Painted Table by debut author Suzanne Field is truly a gem, so much so that I hope my simple words will encourage many new readers to discover its wealth. Poignant, compelling, uncomfortable, emotional, relevant, redemptive - these are just a few descriptive terms that quickly come to mind. It was hard to read at times, but impossible to put down at the same time - and Suzanne's writing is exquisite. It also has one of the most moving, joyous endings I've ever read. This is a story that I doubt I'll ever forget.

The theme of mental illness is rarely addressed in Christian fiction and Saffee discovers that while friends and neighbors show love and support during many afflictions, mental illness isn't one of them. Suzanne's story is eye opening and gripping with its detail of Joann's gradual path to insanity, its effect on Saffee and her sister April, and Saffee's road to redemption.

"You know what I was thinking about on the bus?" April sounds wistful.
"What?"
"I was hoping when we got home Mommy would be in the kitchen, making chocolate chip cookies."
"Sure, April," Saffee rolls her eyes. "Might as well hope for the moon."


A hand-crafted Norwegian table, passed down through generations of the Kirkeborg family, becomes the focal point in how Joann's husband, Nels, and daughters relate to her mental illness. As a young child dealing with the loss of her mother, Joann found the table to be a substitute place of comfort. "Under the table Joann had been a child without love. To be a child without love is a transgression."

We experience this story through the eyes of Saffee, Joann's daughter, as we literally watch her grow up - wincing at many scenes, while rejoicing at others. I loved how two teachers had such a positive effect on the young Saffee: her 6th grade teacher who made her feel that she was a person of worth, and Sunday School teacher, Mrs. Eilert. In her class "Saffee sings, 'Come into my heart, Lord Jesus' . . . and He does. Even though she has often sought to be alone, she experiences a curious relief that she will never be alone again."

Nels was one of my favorite characters, a complex man I came to admire. In the beginning he seems like a husband and father so busy providing for his family that he almost becomes a stranger to them - and a man in constant denial of Joann's illness.  But his commitment, love, faithfulness, and desire to protect are qualities we can all look up to. In a conversation with Saffee, Nels explains, "When I married your mother, I promised to stick with her through thick and thin, and I will."

If you've ever felt that God worked through someone He placed in your life, then you can relate to this story. God spoke to Saffee through many Scriptures that she read, but her husband Jack's words also had a profound effect:   "Maybe the best way to honor your mother is not to become like her."

Rich in its characterization, realism and spiritual themes, The Painted Table is a novel that I highly recommend to all readers. Best of the best in my opinion! "The Painted Table, although fictionalized where necessary, is about 90% true -- hard to put a number on that though. In reality, my mother lived, paralyzed, for 16 years after her stroke. She died just three yrs. ago. My dad drove 60 miles round trip once or twice a week to stroke her arm and whisper sweet nothings to her. He is 99 now, and only after her death did he allow himself to 'get old.'
"I have written a children's Christmas book that is 'making the rounds' to publishers now. I am waiting for God to nudge me into another story. I love to write."


Suzanne Field, a graduate of the University of Minnesota, has taught English as a Second Language in China, Ukraine, and Hawaii. She has also been a magazine editor and home-school teacher. Suzanne writes to encourage others to rise above memories and embrace the goodness found in each day. She and her husband have five children and divide their time between Kansas and Hawaii where she is a tutor and mentor.

Connect with Suzanne at Facebook.com/SuzanneFieldThePaintedTable.

Thank you to Litfuse Publicity for providing an electronic copy of The Painted Table in exchange for my honest review.
Posted by Carole at 8:30:00 AM