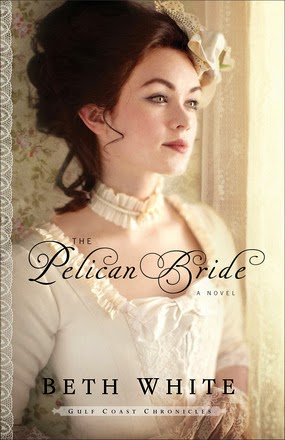 She's come to the New World to escape a perilous past. But has it followed her to these far shores?

It is 1704 when Frenchwoman Geneviève Gaillain and her sister board the frigate Pélican bound for the distant Louisiana colony. Both have promised to marry one of the rough men toiling in this strange new world in order to escape suffering in the old. Geneviève knows life won't be easy, but at least here she can establish a home and family without fear of persecution for her outlawed religious beliefs.

When she falls in love with Tristan Lanier, an expatriate cartographer-turned-farmer whose checkered past is shrouded in mystery, Geneviève realizes that even in this land of liberty one is not guaranteed peace. Trouble is brewing outside the fort between the French colonists and the native people surrounding them. And an even more sinister enemy may lurk within. Could the secret Geneviève harbors mean the undoing of the colony itself?

I was initially drawn to The Pelican Bride by its beautiful cover, which promises romance - but it is so much more! Rich with fascinating historical detail about a place and time I've never read about, there's also good characterization, adventure, and romance. The first fifty pages or so might move a little slowly for some, but I enjoyed the historical aspect and was able to get the characters straight before the plot really took off.

The story opens in 1704 on Massacre Island, Mobile Bay, as several women disembark from the French frigate Pélican - but their final destination is Fort Louis, which would eventually become the city of Mobile. This is such an interesting period of history because so many factors come into play. Canadians had moved into the area with one purpose in mind:  ". . . to map the coastline of the gulf, to track the rivers that fed it, find a settlement site, and stake France's claim before Spain and England could get a toehold." While local Indians were generally friendly to the French, that wasn't the case when it came to northern Alabama tribes. And then there was the religious issue - namely, intolerance for beliefs outside of the Catholic faith.

With all of this as a backdrop, Beth did a great job with both real-life and fictional characterization, as well as plot. Historical fiction fans will find much to like here, and Beth included "A Word to the Reader" section at the end which goes into greater detail.

Tristan Lanier and Geneviève Gaillain make great lead characters. Tristan - "a sour, lonely former mapmaker with a hole the size of Canada in his heart" - is a compelling figure. Geneviève is one of several women who married and civilized those first French-Canadian settlers, but carries some hidden baggage from her life in France. Although they don't have a lot of time together in the book, a good chemistry is present and I enjoyed their romance. Secondary characters are strong, one of my favorites being the Jesuit Priest, Father Mathieu.

The whole idea of religious intolerance and persecution just blows my mind, and Beth did a great job incorporating that element into the narrative. "Tolerance in France for Huguenots had come to a flaming end" and Geneviève had come to the New World seeking peace. I love her words to Tristan in defense of what being a Huguenot or Protestant meant:  "It means I am of a people persecuted for centuries for obeying Scripture and for refusing ritual worship. It means I am under the rule of God rather than any man, be he king or archbishop or dragoon. It means I must forgive you because Christ first forgave me."

Geneviève's strength, commitment and faith are inspiring, and we see spiritual growth in Tristan as well. I recommend The Pelican Bride to fans of historical romance that has a strong historical element. Those who enjoy southern fiction will also like this story.

Beth White's day job is teaching music at an inner-city high school in historic Mobile, Alabama. A native Mississippian, she is a pastor's wife, mother of two, and grandmother of one--so far. Her hobbies include playing flute and pennywhistle and painting, but her real passion is writing historical romance with a Southern drawl. Her novels have won the American Christian Fiction Writers Carol Award, the RT Book Club Reviewers Choice Award, and the Inspirational Reader's Choice Award.

Thank you to Revell for providing a copy of this book as part of their blogger program in exchange for my honest review.
Posted by Carole at 4:44:00 PM