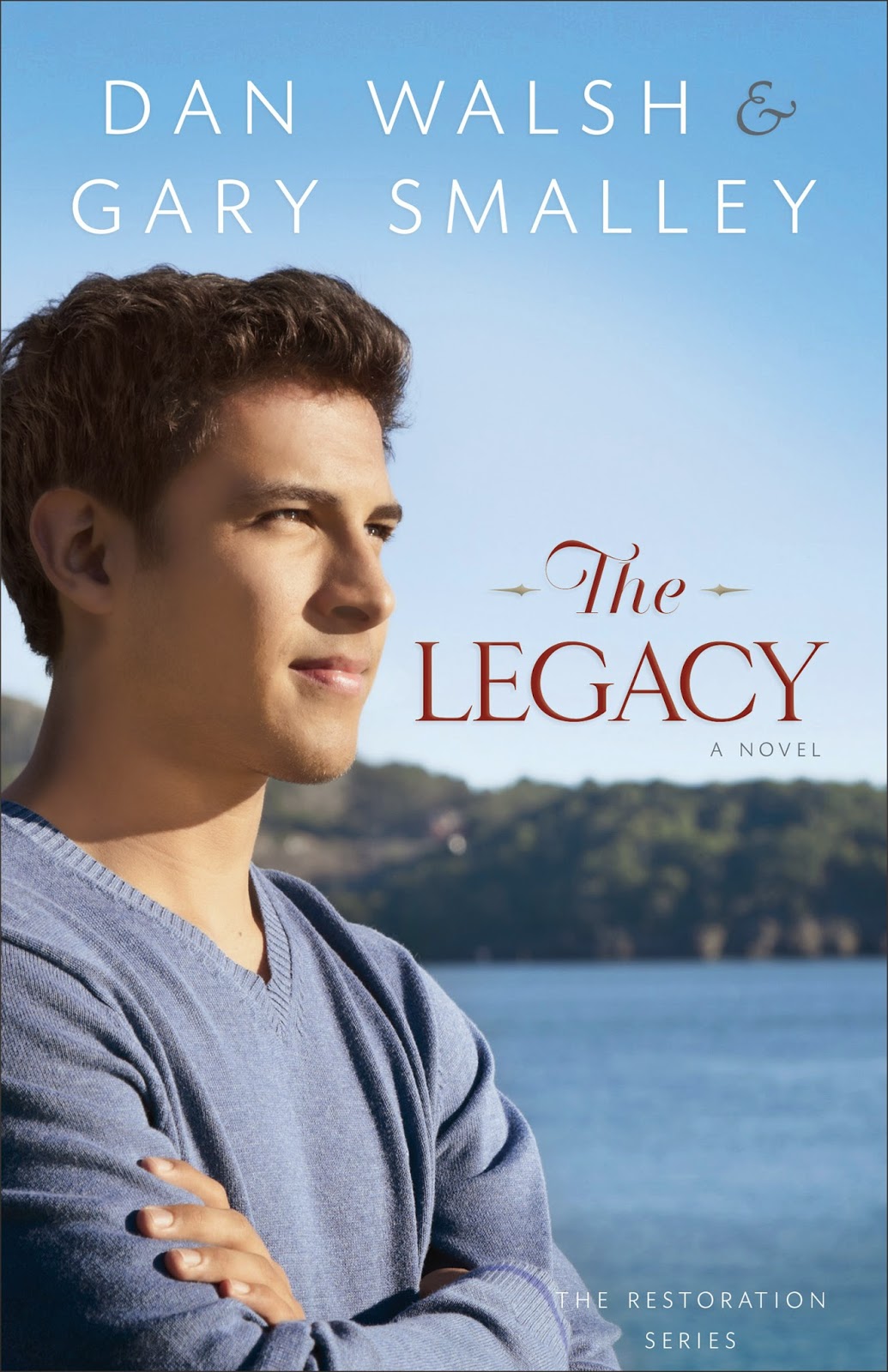 For years, Doug Anderson has been drifting slowly but steadily away from both his family and his faith. His parents have been trying to reach him before he falls too far. His friend Christina hopes what she is seeing online isn't true. But sometimes you have to hit bottom before you're ready to grow up.

Just as things begin to settle down a bit, Doug's life takes a turn that requires every bit of faith and patience for both his family and Christina--whose growing feelings for Doug, a man who writes her off as not worth his time, keep her off balance. Will Doug's crisis finally clear his vision and help him focus on what he has right in front of him?

The Restoration Series, co-written by Dan Walsh and Gary Smalley, comes to a very satisfying conclusion with Doug's story in The Legacy. These stories are a shining example of how fiction can be used not only to entertain, but to impact lives. I have greatly enjoyed all four books in this well-written series - but for me, Dan and Gary hit it out of the ballpark with this one. I believe the themes of  prodigals and legacy are things to which countless faithful parents can relate, for love and concern for children are at the core of every parent's being.

Jim Anderson's "legacy" plays a big part in this story, because we could anticipate the trajectory Doug's life would take back in book #1, The Dance, partly as the result of Jim's absentee parenting many years before that. Without question, my favorite character is Jim's Uncle Henry, through which much practical wisdom is imparted in personal conversations. Also, Allan and Michele's story from The Desire comes to a beautiful conclusion. Each book in this series could technically stand alone, but I think it would feel like a piece of the puzzle was missing if not read in order.

Many readers will enjoy Doug's talent for illustrating graphic novels and his visit to a local ComicCon. Through the character of Christina, we see the effect of a believer's witness, and her comparison between fantasy heroes and Jesus is too good not to share:

"I think they're so popular because they give us hope that all the bad, crummy things going on all around us, and all the evil people making them happen, can be stopped. The real-life people in charge don't seem to be able to do anything about it. . . . Jesus was a superhero, but for real. He stood up for the people no one paid attention to or cared about. He defied all the power brokers of his day, all the greedy people, all the users and the takers. And he said things about life and love and relationships that no one had ever said before. And if that wasn't enough, he had the power to pull it off. He could heal the sick with a word, walk on water, calm a raging storm, even raise the dead back to life. But then he didn't use all that power to get things for himself. Instead, he gave it all away, even his own life . . . just so we'd have a chance to get close to his Father."

There is so much to take away from The Legacy, so much to dwell upon. This is not a retelling of the Prodigal Son, yet many applicable points are drawn from this parable, especially relating to the father. Trusting God to deal with my children is a lesson that I have to continually relearn, and I cherish the reminder that while they may be out of my ability to reach, they're certainly not out of God's.

But it's these words of Uncle Henry that parents everywhere can cling to . . .

"Sometimes being a parent is about being the kind of person they'll want to turn to, maybe even listen to, when they've made a total mess of things. Sometimes all the hard things and all the right things God wants us to do now - when they're drifting away from us - are just the building blocks to a bridge they can cross over on their way back."

After all, aren't we all prodigals in need of that bridge leading back home to our Father?

The Legacy is outstanding, as is the whole series. Highly recommended.

Click on the titles to see my reviews of the previous books in this series:
#1, The Dance
#2, The Promise
#3, The Desire 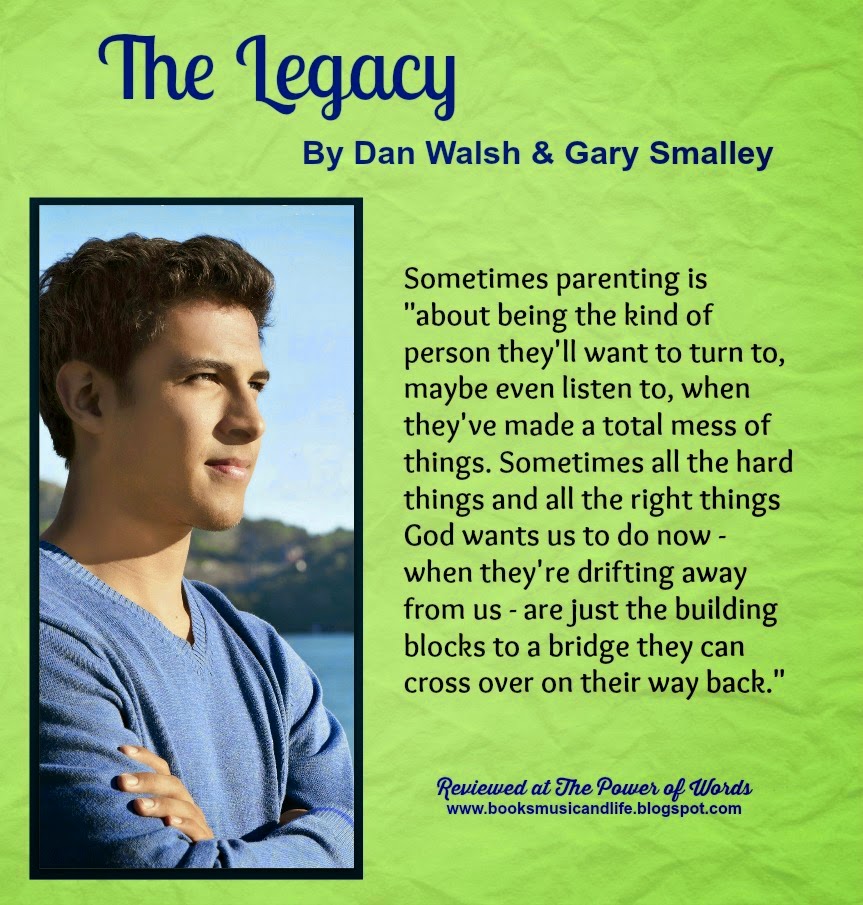 Dan Walsh is the bestselling author of several books, including The Dance and The Promise with Gary Smalley, as well as The Unfinished Gift, The Discovery, and The Reunion. He has won three Carol Awards, and two of his novels were finalists for RT Book Reviews Inspirational Book of the Year for 2011 and 2012. A member of American Christian Fiction Writers, Dan served as a pastor for twenty-five years. He lives with his wife in the Daytona Beach area, where he's busy researching and writing his next novel. Visit danwalshbooks.com for more.


Gary Smalley is one of the country's best known authors and speakers on family relationships. He is the bestselling and award-winning author or coauthor of 16 books, along with several popular films and videos. He has spent over 30 years learning, teaching, and counseling, speaking to over 2 million people in live conferences. Smalley has appeared on national television programs such as Oprah, Larry King Live, Extra, The Today Show, and The Sally Jessy Raphael Show, as well as numerous national radio programs. Gary and his wife, Norma, have been married for 50 years and live in Branson, Missouri. They have three children and six grandchildren.