Review: Among the Fair Magnolias 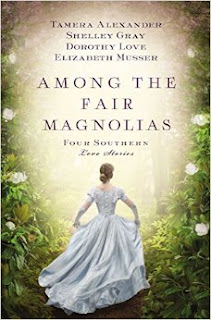 
Among the Fair Magnolias is a wonderfully entertaining and moving collection of stories. It's all about historical romance and being southern fiction is a bonus for me, but these character-driven stories rise above that genre with their compelling storylines set during a turbulent time in America's history from 1860-1878. There's no way I could pick a favorite because all are well written and compelling in their own way.

Among the Fair Magnolias . . . What an evocative title for these four novellas featuring Southern women with hidden depths! As a life-long resident of Georgia, I've always known of the magnolia blossom's association with the perseverance, dignity, and strength that Southern women possess - the ingrained ability to not just endure hardships, but to rise above them. And that is exactly what you will find here. I delight in recommending this novella collection with surprising depth.


A Heart So True by Dorothy Love
Abigail knows all too well what is expected of her: to marry her distant cousin Charles and take her place in society. But her heart belongs to another. A terrible incident forces Abby to choose between love and duty.

Duty, politics, physical abuse and action that held my interest are just a few elements that we see in Dorothy's story. I loved revisiting the Pawleys Island, South Carolina, setting of Carolina Gold and even seeing a few familiar faces. A little more "together" time and relationship development for Abigail and Wade would have added a lot to this enjoyable story, though.


To Mend a Dream by Tamera Alexander
Savannah Darby would do almost anything to revisit her family home. So when new owner, Aidan Bedford, a Boston attorney and former Union soldier, seeks to redecorate the house for his fiancée, Savannah jumps at the opportunity. But the clock is ticking. Can she find the box her father supposedly hid there during the war before her assignment is completed? And before she sees yet another battle lost on the home front. This time, one of the heart.

Savannah Darby was a memorable secondary character in To Win Her Favor and I'm so glad Tamera was able to feature her here. This is a beautiful and poignant story packed with intricacies skillfully woven together.  Everything about Savannah and Aidan is real and touching, with great chemistry between them. And the story beautifully illustrates God's quiet orchestration of our lives, expressed as they reflected on how often "He interlaced such painful parts of this earthly journey with such joyous ones, weaving them together with such skill and grace. And beauty."


Love Beyond Limits by Elizabeth Musser
Emily has a secret: She’s in love with one of the freedmen on her family’s plantation. Meanwhile, another man declares his love for her. Emily realizes some things are not as they seem and secrets must be kept in order to keep those she loves safe.

This is the first story by Elizabeth Musser that I've read and let me just say that I will be searching for more immediately, for anyone who  can write such a moving and eye-opening story as this demands my attention. I loved the Georgia setting, although I learned a lot about my state's Reconstruction history that I'm not proud of. Elizabeth spins a poignant story that features themes of racial superiority and "taboo" relationships, making me realize that our world hasn't progressed all that much. And I had so much admiration for the lead characters, Emily and Thomas.


An Outlaw’s Heart by Shelley Gray
When Russell Stark returns to Fort Worth, he’s determined to begin a new life. But when he arrives at his mother’s homestead, he discovers she’s very ill, and the woman he loved is still as beautiful and sweet as he remembered. With time running out, Russell must come to terms with both his future and his past.

Up until now, all I have read by Shelley Gray has been Amish fiction, but it's evident that her creative storytelling ability carries over to other genres as well. Russell Champion's story evolved from Shelley's previous historical series and I simply loved this flawed character, as well as Nora and others in the town. Poignant and touching, this story beautifully conveys forgiveness, change, and that we shouldn't always define people by their past - and that you really can go home!

Enjoy this clip as Dorothy, Tamera, Elizabeth and Shelley share about their stories . . . 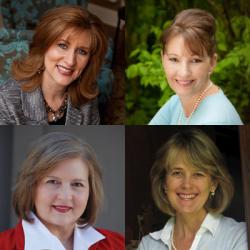 Tamera Alexander is the best-selling author of numerous books including “A Lasting Impression” and “The Inheritance.” Tamera is a two-time Christy Award winner, two-time RITA winner, and a recipient of the prestigious Library Journal Award.
A native of west Tennessee, Dorothy Love makes her home in the Texas hill country with her husband and their golden retriever. An award-winning author of numerous young adult novels, Dorothy made her adult debut with the Hickory Ridge novels.
Shelley Gray is the author of The Heart of a Hero series. Her Amish novel (written as Shelley Shepard Gray), “The Protector,” recently made the New York Times best seller list.
Elizabeth Musser, a native of Atlanta, Georgia now living in France, is a novelist who writes what she calls ‘entertainment with a soul.’ For over 25 years, Elizabeth and her husband, Paul, have been involved in mission work with International Teams.

Find out more about Alexander, Gray, Love, Musser at http://www.thomasnelson.com/among-the-fair-magnolias.

The post Story Spotlight on ‘Among the Fair Magnolias’ appeared first on Litfuse Publicity Group.