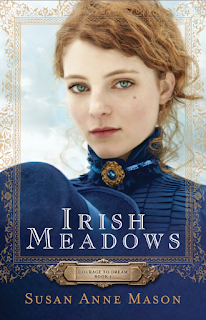 Faced with an uncertain future, sometimes all you have left is the courage to dream.

Brianna and Colleen O’Leary know their Irish immigrant father expects them to marry well. Recently he’s put even more pressure on them, insinuating that the very future of their Long Island horse farm, Irish Meadows, rests in their ability to land prosperous husbands. Both girls, however, have different visions for their futures.

As the farm slips ever closer to ruin, James O’Leary grows more desperate. It will take every ounce of courage for both sisters to avoid being pawns in their father’s machinations and instead follow their hearts. And even if they do, will they inevitably find their dreams too distant to reach?

Irish Meadows, book #1 of the Courage to Dream series, has such an appealing setting in the Long Island, New York, horse farm by the same name. The year is 1911 and the focus is on the James O'Leary clan, a family of Irish immigrants struggling to survive during a time when horse racing was banned in many states. Characters are well developed and filled with flaws to the extent that I didn't always like them, but that's what makes an enjoyable read for me. Susan Anne Mason's debut historical romance is a page turner and I look forward to more from her very soon.

The romances of two sisters unfold simultaneously with emotion, glimpses of humor, and great chemistry. Brianna and Gilbert had been childhood best friends, and their initial meeting in the stables upon his return home immediately had me engaged. But while I enjoyed their story, it was Colleen and Rylan who fascinated me most. A "happily ever after" ending seemed unlikely for both couples, so readers will be pleasantly surprised.

James O'Leary, Colleen and Brianna's dad, is a strong character with an almost overpowering impact on the lives of his family. Having survived the rough times that most Irish immigrants faced, he determined to use the most available financial assets he had in order to save the family farm, which just happened to be his children. Instead of cherishing Colleen and Brianna as blessings, he used them as pawns to better his finances. And while years earlier, James had opened up his heart and home to bring the orphaned Gil into his family, he now demands that he court the banker's daughter. I think the series title, Courage to Dream, beautifully comes in to play here as the characters seek to rise above the restrictions of their culture and times.

That the Catholic faith was important to the O'Leary family is something I would expect from this era, and I appreciated that aspect. We do see spiritual and emotional growth in the main characters, but Colleen's story is the most redemptive and I loved everything about it. God's orchestration of events and ability to transform is clearly seen - and even if some change happened a little quickly, that's okay with me because it made for great storytelling.

From the book's cover and description, I expected more of a family-saga type story with lots of historical detail, but the main focus of Irish Meadows is romance. Although that's not a bad thing, I would have loved to see slightly less emphasis on romance and more rich historical elements  because the Irish Meadows horse farm and 1911 era have so much to offer. Still a very enjoyable read for me and I eagerly await the story of the troubled older brother, Adam, in A Worthy Heart, coming January 2016.

Recommended to all who enjoy historical romance.

Susan Anne Mason's debut historical novel, Irish Meadows, won the Fiction from the Heartland contest from the Mid-American Romance Authors Chapter of RWA. A member of ACFW, as well, she lives outside of Toronto, Ontario, with her husband and two children.