Review: A Season of the Heart 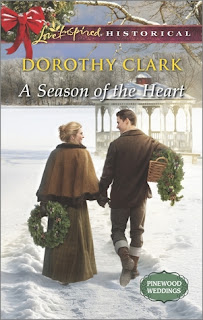 A Season of the Heart
By Dorothy Clark
Pinewood Weddings, #4
Love Inspired, 2014

Rugged logger Daniel Braynard meets none of Ellen Hall's husband requirements. Groomed for a prestigious marriage, she already has a choice between two wealthy suitors. She plans to make her decision by Christmas while visiting her hometown. But when tasked with creating the town's decorations, she and Daniel are forced to work together. And her former childhood rescuer has matured into a man she can no longer ignore.

Daniel hardly recognizes the ambitious socialite Ellen has become. Somewhere beneath her airs is the spirited, warmhearted friend he has never forgotten. As Christmas nears, will the chill between them thaw to reveal the gift of a sweet love that was meant to be?

I find that Love Inspired romances are exactly what I need during busy times or between heavier reading – or just when I want a “comfort” read, for that matter. A Season of the Heart is the first book I’ve read by Dorothy Clark and I can already say that she is one of my favorite writers in the Love Inspired line. This entertaining story with its vivid rural setting in Pinewood Village, NY, December of 1841, is guaranteed to put readers in the Christmas spirit. With such elements as skating parties, bonfires, and the making of parsonage and gazebo decorations by hand, I fell in love with Pinewood Village and its residents.

The Pinewood Weddings series tells of four friends who grew up together in this close-knit community and became lifelong friends. This final book easily stands alone, but reading the entire series would give a more fulfilling experience when it comes to characters and setting. We see Callie and Sadie in this story, and Willa plays a prominent part. I am eager to go back and read the stories of Willa, Callie, and Sadie.

Daniel is an endearing hero and it is so heartwarming to see his brotherly affection for the girls – brotherly except for Ellen, that is! - and also the loving care he freely gives to his mom. Ellen and Daniel’s story is filled with the usual misunderstanding and misreading of each other’s feelings, all of which move the story along nicely, and there’s a sweet chemistry between them. Dorothy beautifully weaves their earlier years into the story and it was so cute when Daniel used his pet name for her, Musquash.

Ellen isn’t all that likeable in the beginning, for she has allowed her parents’ socially-elite values to become her own – and this is something that anyone who has ever mistakenly bought into someone else’s values can relate to. Coming home to Pinewood while she tries to decide which wealthy suitor best serves her plans, Ellen gradually learns to see past the world’s allure . . . “Perhaps she was looking at people and things through a different prism since coming back to Pinewood and being with her old friends.” I loved how faith is conveyed in this story, through the belief of Daniel’s praying mom to have faith that God will work things out, and then Willa’s words to Daniel: “Love and respect are worth more than all the worldly goods a man can heap on a woman.”

A Season of the Heart is a sweet romance for Christmas or any time of the year. Within the Love Inspired line, 5 stars.

Married to her own personal hero for over fifty-eight years, mother of three, grandmother of four, and great-grandmother to a beautiful baby girl, Dorothy calls on her life’s experiences—including designing and helping her husband build their home, complete with beams they hewed by hand and a real, old-fashioned walk-in kitchen fireplace she occasionally cooks in, to add color and depth to her stories. But, while she still knows how to clean used bricks, mix mortar and swing a mean hammer, she now only designs homes for the characters in her books. An antique lover, she fills those homes (and her own) with furnishings appropriate to the time.
When she is not busy writing, Dorothy enjoys visiting with family—who live much too far away—and traveling with her husband throughout the United States doing research for future books. She values her American heritage and believes in God, love, family and happy endings, which explains why she feels so at home writing Christian historical romance.

Thank you to Dorothy Clark for providing a copy of this book in exchange for my honest review. 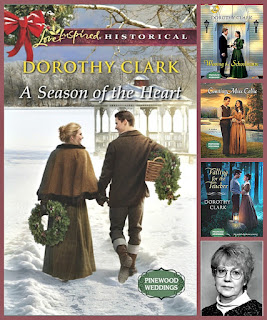