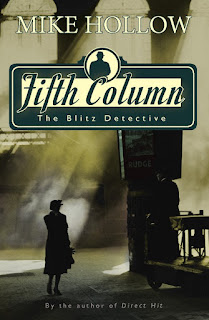 At first glance, the young woman found in the early hours of the morning where bombs have landed is just another casualty of the previous night’s air raid. But when the post-mortem shows signs of strangulation, Detective Inspector Jago is called on to investigate.

The dead woman is smartly dressed but carries no identification. However, a local engineering company reports a staff member has failed to appear at work that morning and the body is quickly identified as that of Miss Mary Watkins.

DI Jago’s initial interviews yield little fruit; no one can think of a reason why Mary would be murdered. But as the investigation continues DI Jago begins to uncover a trail of deception and betrayal.

Although not particularly fond of WWII fiction, I’m crazy about British drama and police procedurals, so I decided to give Fifth Column a try – and am I ever glad I did! Those four adjectives above don’t even begin to do it justice. Mike Hollow is an excellent descriptive storyteller. He knows his setting, police methodology, and human nature – and his narrative is easy to follow.

Fifth Column’s West Ham setting in London’s East End gives an urban grittiness to this WWII mystery, and I can’t remember when I’ve been pulled into a story’s atmosphere this much. Sometimes life gives a false semblance of certainty, but the Blitz wiped that out. Homes were destroyed, lives torn asunder. People slept in shelters at night and struggled to maintain a normal life during the daytime. The Blitz “flung ordinary people into the front line. Enemy bombs rained down on docks, factories and homes alike in chaotic destruction. Death struck randomly from street to street. No one could be sure they would be alive the next morning.”

I really like John Jago, a detective inspector in London’s Metropolitan Police, based at West Ham police station. At 18, he was conscripted to fight in the British Army during the Great War, and struggles with lingering memories. When Jago mentions having purchased his “shelter bed” at Selfridges (PBS drama by the same name), I loved being able to picture that London department store. Now he’s 42 and a bachelor, but only because he hasn’t yet found the right person. There’s a hint of romance with an American war correspondent, Dorothy, and I look forward to the growth of their relationship.

Fifth Column is also strong as a police procedural. Suspects abound, but I never found it confusing to follow. The mystery is solved through meticulous, step-by-step investigation that reflects human behaviors that never change. I had never heard of the term “fifth column” and was interested to learn that it refers to a group of people who sympathize with their country’s enemy.

British fiction sometimes contains a little mild language, but I didn’t notice any and thought this was a clean read. The spiritual thread is subtle, mainly brought out toward the end as Jago and Dorothy talk about evil, justice and judgement. I suspect faith themes will be further developed as the series progresses.

I’d like to read the previous book, Direct Hit, and look forward to much more from Mike Hollow. 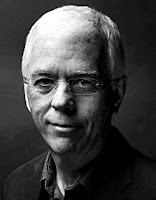 Mike Hollow studied languages at Cambridge, then worked for the BBC and then Tearfund. Now a freelance writer and editor, he lives in Basingstoke (England) with his wife Margaret. A popular poet, his work has been widely performed and has appeared in many collections.

Thank you to Kregel and Lion Hudson for providing a copy of this book in exchange for my honest review.