Review: Death among the Doilies 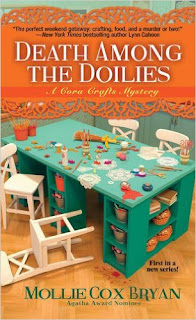 Death among the Doilies
By Mollie Cox Bryan
A Cora Crafts Mystery #1
Kensington, 2016

For thirty-something blogger Cora Chevalier, small-town Indigo Gap, North Carolina, seems like the perfect place to reinvent her life. Shedding a stressful past as a counselor for a women’s shelter, Cora is pouring all her talents—and most of her savings—into a craft retreat business, with help from close pal and resident potter Jane Starr. Between transforming her Victorian estate into a crafter’s paradise and babysitting Jane’s daughter, the new entrepreneur has no time for distractions. Especially rumors about the murder of a local school librarian . . .

But when Jane’s fingerprints match those found at the grisly crime scene, Cora not only worries about her friend, but her own reputation. With angry townsfolk eager for justice and both Jane’s innocence and the retreat at risk, she must rely on her creative chops to unlace the truth behind the beloved librarian’s disturbing demise. Because if the killer’s patterns aren’t pinned, Cora’s handiwork could end up in stitches . . .

Death among the Doilies, book #1 in a new series by Mollie Cox Bryan, is an excellent cozy mystery. This story has character depth and emotion, humor, a vivid setting that almost becomes a main character, and Mollie’s writing flows easily across the page. I believe this is a spinoff from another series that I’m not familiar with, and I enjoyed it so much that I’d like to read more of Mollie’s writing.

There’s a lot to like in Death among the Doilies. The series is set in Indigo Gap, a fictional town located in the mountains of western North Carolina, “a place that time had almost forgotten” – and contains all the essentials that make small-town settings so endearing, such as artisan shops, quaint restaurants, pretty churches, etc. Its streets are named after shades of blue, and one legend says that it had been “a crossroads gap in the mountains where people came together and traded fur, pottery, and cloth. Because the locals grew the plants that gave indigo dye its color, the town became known as Indigo Gap.”

Cora, who anchors the series, is a very appealing character. She had formerly been a counselor at a women’s shelter in Pittsburgh, a place where “. . . she had seen it all. And what she saw was not good.” In that job, she had used the making of crafts as a bonding and healing mechanism, and that’s what she hoped her new craft retreat business in Indigo Gap would become. And I loved her home/retreat center, Kildare House, a beautiful Victorian home with a carriage house and a cottage.

Another strong character is Jane, Cora’s business partner and close friend that she first met in the women’s shelter. Jane seems fragile at first, but she’s really a survivor who decided that her new life was worth fighting for. I loved how Mollie fleshed out these two characters by giving their backstories, which hooked me emotionally and made me care about them. Ruby, a resident who came with the Victorian house, is also precious. The friendship between Cora, Jane, and Ruby is a big part of this story.

I’m not a “crafty” type of person, but I really enjoyed that theme. Cora loved to upcycle, repurpose ordinary things into something beautiful and useful. Her first retreat was led by Jude, an expert on brooms, of all things! It was interesting to learn from Jude’s class . . . “Brooms were used to sweep good luck into the home and to sweep unpleasant energies out. If you were going to curse someone, you’d take your broom and sweep the unpleasant thoughts and energies into another person’s doorway. No need for fighting or guns, then, if you had a good broom.”

All of this provides the backdrop for a well-plotted murder mystery filled with quirky characters – and lots of surprises along the way. The only negative for me was a few instances of mild profanity, but they were very few. A very clean read overall.

On her website, Mollie provided a prequel short story which I recommend reading first. And book #2, No Charm Intended, releases in 2017. I look forward to more from Cora and her friends.

Mollie Cox Bryan is the author of the Cumberland Creek Scrapbooking mystery series.  She is also author of two cookbooks, the regional bestseller Mrs. Rowe’s Little Book of Southern Pies and Mrs. Rowe’s Restaurant Cookbook: A Lifetime of Recipes from the Shenandoah Valley.

An award-winning journalist and poet, she currently blogs, cooks, and scrapbooks in the Shenandoah Valley of Virginia with her husband and two daughters. Scrapbook of Secrets was nominated for an Agatha Award for Best First Novel.

Thank you to Great Escape Tours for providing an e-copy of this book in exchange for my honest review.