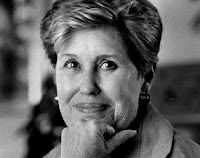 
If there is one man singularly responsible for the children of this country, it's Doctor Spock. (That reads strange, but I don't know how to fix it.)

What I'm getting at is, this man is the great white father of every parent who has bungled his way through a vaporizer tent or a two-year-old's tantrum. Why, there was a time when, if Doctor Spock had told me to use one-legged diapers, I would have done so without question.

Now he has shaken me up. He has said there is no Santa Claus and urges us to tell our children the truth.

"Kids, brace yourselves," I said. "Doctor Spock says there is no Santa Claus and that I should never have taken you to see a live one in the first place because his behavior is noisy and his clothes are strange. Also, he inspires greed."

They looked at each other, obviously stunned.

"That's just not true," one said. "You know there's a Santa Claus, just as you believe there are fairies dancing on our lawn."

"Knock it off with the 'Yes, Virginia' bit. I told you that. Now I'm telling you Santa Claus is an upsetting experience. There can't be a Santa Claus."

"There can if you want him to be," they said cautiously. 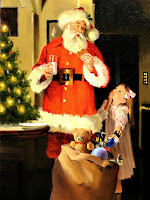 "I don't know," I hesitated. "He does have a certain magic that makes people happy and kind toward one another. He does keep the work economy steady for elves and gives seasonal employment to reindeer. Heaven knows, he has your father spending more money than he earns and all of us crawling around on the rooftops with strings of lights in our teeth. I don't know what to believe anymore. I've always had such faith in Dr. Spock!"

"Have you ever seen Dr. Spock?" asked one.

"No, but . . . now cut that out! I know he exists. The point is how can I go on believing in a Santa Claus who parachutes from a helicopter over a shopping center parking lot, breaks his leg and ends up in a hospital?"

"Well, where else would you go with a broken leg?" asked another.

"The point is, kids, he's merely a mortal man, and mortal men don't go around pushing their fat stomachs down skinny chimneys."

"Of course he's mortal," they explained. "Otherwise, how could he have eaten all those cookies you put out for him last year?"

"That's right," I said excitedly, "he really did come, didn't he, and left me that dreamy black jacket that I know your father wouldn't have bought. You know something? I believe in Yogi Bear, and his behavior is noisy. I believe in Phyllis Diller and her clothes are strange. I believe in the Bureau of Internal Revenue and they're not exactly philanthropic. Kids, there is a Santa Claus!"

As the curtain closed on this domestic scene, the seven-year-old leaned over to whisper in his father's ear, "Boy, Dad, she gets harder to convince every year!"

If you’re an Erma Bombeck fan, or if you enjoyed this post,
I’d love to hear from you! 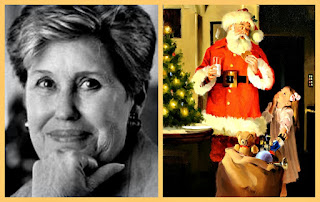