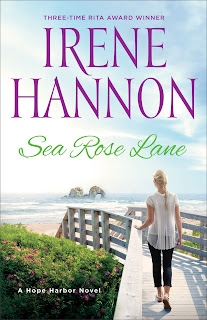 Two people starting over . . . in a town known for second chances

After a devastating layoff, attorney Eric Nash heads back to Hope Harbor--only to discover that his childhood home is being transformed into a bed and breakfast. Instead of plotting his next career move in peace, he's constantly distracted by noise, chaos--and BJ Stevens, the attractive but prickly blonde architect who's invaded the house with her motley crew. As for BJ, her client's son might be handsome, but after a disastrous romance, dating isn't high on her agenda. Yet when they join forces for to help Hope Harbor seniors, might they also find healing, hope, and a new beginning themselves?

I know Irene Hannon writes outstanding romantic suspense, but her contemporary stories are my favorite by far. Sea Rose Lane, set in a picturesque small town on the Oregon coast, is filled with appealing characters who face true-to-life situations and are met with hope. Secondary storylines, such as those of Luis and Eleanor, provide even more richness and depth. It’s a poignant story that covers a wide range of emotions, and it captured my attention from the very first page.

I was really drawn to BJ and Eric. BJ, carrying a little guilt that she didn’t move in time to help her grandmother, is intelligent, hardworking, and has a heart for others. Eric is a charismatic high achiever who, as the story progresses, becomes less certain of his goals. As for his faith … “For a man who preferred definites to maybes and facts to fancies, leaving tomorrow to the whim of fate – or God – was downright scary.” They have great romantic chemistry and their initial meeting is hilarious.

Only Irene could draw readers to such whimsy characters as two seagulls and a seal. And then there’s Charley! We may never know if he’s simply eccentric or his wisdom involves something more, but he is a favorite of mine.

Spiritual themes become a natural part of the story … that simple acts of kindness have far-reaching impact, that what seems like disaster can actually be a gift, an opportunity. Eleanor prays, “Let me see everyone as an equal and a worthy brother and sister – and act accordingly.” There’s also the reminder that “while looks and language and traditions might differ, all hearts feel the same emotions.”

I wish this series could go on and on, because I’ll never get enough of Hope Harbor and its residents.

Click on the title, Hope Harbor, to see my review of the previous book.

Irene Hannon is the bestselling author of more than fifty romantic suspense and contemporary romance novels, including One Perfect Spring, Hope Harbor, and the Heroes of Quantico, Guardians of Justice, and Private Justice series. Her books have garnered dozens of honors, including three coveted RITA Awards from Romance Writers of America. She is also a member of Romance Writers of America's elite Hall of Fame.