Review: The Dog Who Was There 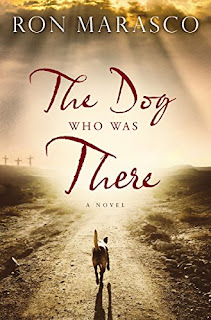 The Dog Who Was There
By Ron Marasco
Thomas Nelson, 2017

No one expected Barley to have an encounter with the Messiah.

He was homeless, hungry, and struggling to survive in first century Jerusalem. Most surprisingly, he was a dog. But through Barley's eyes, the story of a teacher from Galilee comes alive in a way we've never experienced before.

Barley's story begins in the home of a compassionate woodcarver and his wife who find Barley as an abandoned, nearly-drowned pup. Tales of a special teacher from Galilee are reaching their tiny village, but when life suddenly changes again for Barley, he carries the lessons of forgiveness and love out of the woodcarver's home and through the dangerous roads of Roman-occupied Judea.

On the outskirts of Jerusalem, Barley meets a homeless man and petty criminal named Samid. Together, Barley and his unlikely new master experience fresh struggles and new revelations. Soon Barley is swept up into the current of history, culminating in an unforgettable encounter with the truest master of all as he bears witness to the greatest story ever told.

I can honestly say that I’ve never read a book quite like Ron Marasco’s The Dog Who Was There and I enjoyed it very much. This is the second story written from a dog’s perspective that I’ve read recently – and while the previous one didn’t grab my attention, this one is excellent. The story thoroughly entertains as a dog adventure, while touching me emotionally through its insight and complexity.

The Dog Who Was There is a combination of dog adventure and biblical fiction. The narrative is simple and straightforward, yet this is not a book for young children because of a reality befitting the times that is portrayed. There’s warmth and affection, but also grittiness, pain and loss.

The author did a great job conveying a feel for Jerusalem, its people, and the tyranny of Roman rule. I may be a cat person, but I fell in love with the precious Barley. It was easy to connect with this little guy because he only wanted the things that we all seek – love, acceptance, and security – and we’re reminded through Barley’s adventures that those things can come in totally unexpected ways.

The effect of experiencing the last week of Jesus’ life through Barley’s thoughts is memorable. I loved his intuitiveness when it came to people, especially his instinct about the Kind Man (Jesus). On a spiritual level, this story is about the effect of Jesus’ teachings on people from various walks of life, with forgiveness being a major theme. It’s hard to express how moving the crucifixion events are as witnessed through Barley’s eyes and ears. Maybe it’s simply the beauty and freshness of this unique approach.

Heartwarming and heartbreaking at the same time, The Dog Who Was There is full of hope and redemption – and there’s a fantastically happy twist at the end that I never saw coming.

Ron Marasco is a professor in the College of Communication and Fine Arts at Loyola Marymount University in Los Angeles. His first book, "Notes to an Actor," was named by the American Library Association an Outstanding Book of 2008. His second book, "About Grief," has been translated into multiple languages, and he is currently completing a book on Shakespeare's sonnets.

He has acted extensively on TV-from "Lost" to "West Wing" to "Entourage" to originating the role of Mr. Casper on "Freaks and Geeks"-and appeared opposite screen legend Kirk Douglas in the movie "Illusion," for which he also wrote the screenplay. Most recently, he has played the recurring role of Judge Grove on "Major Crimes." He has a BA from Fordham at Lincoln Center and an MA and Ph. D. from UCLA.

Find out more about Ron at http://www.thomasnelson.com/the-dog-who-was-there.