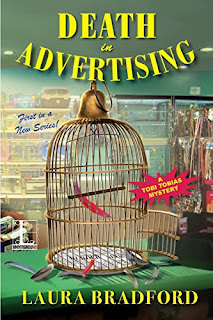 When Tobi Tobias decided to open her own ad agency, having to moonlight in a pet shop wasn’t part of her vision . . . of course, neither was murder.

Sometimes when opportunity knocks, the door you open leads to a closet. That’s certainly the case for Tobi, whose weekends spent cleaning cages in her best friend’s pet shop may soon be over. She’s just landed her first big break—Zander Closet Company needs a catchy campaign slogan ASAP, and Tobi thinks she’s got the right hook to knock ’em dead: “When we’re done, even your skeletons will have a place.”

But when a real dead body topples out of a showcase closet, she’s about to discover there is such a thing as bad publicity. To save her fledgling business and not get killed by the competition, Tobi takes on a new pet project: solving the murder. But with a stressed-out parrot as the only witness to the crime, Tobi will really have to wing it to put the cagey killer behind bars.

Intelligent writing … character depth … well-plotted mystery … charming humor. Death in Advertising is a delightful read and Laura Bradford has quickly become one of my very favorite mystery writers. I just discovered that she has two other series out, one of which is Amish mysteries, and I can’t wait to read more!


Tobi, with a dream to be successful in her ad business, “creating words that left an impression long after they were gone,” is an easily relatable character that I simply enjoyed spending time with. She moonlights at the To Know Them Is to Love Them pet shop, where an African grey parrot named Rudder Malone steals the show with his imitation of voices and sounds. Tobi values friendships and has the right view of life, reflected in these thoughts regarding the murder victim’s palatial home: “Fancy stuff and large rooms didn’t make a home. And a workaholic husband and a near-silent housekeeper didn’t make a loving family.”

The tie-in between murder mystery and Zander Closet Company’s logo is creative genius: “When we’re done, even your skeletons will have a place.” Pretty close to reality! One of my favorite themes is the care, love and respect given to animals, such as the rescue of another African Grey named Baboo after his owner died.

Strong supporting cast adds even more depth – such as Joann at the ad agency, Mary Fran at the pet shop, and I especially loved Mary Fran’s son, Sam. Tobi’s relationship with Andy Zander hints at romance to come, which I’m definitely rooting for!

As with the best of mysteries, things aren’t as they first appear. The story moves at a steady clip, constantly holding my attention. I can truthfully say that I did not want it to end. 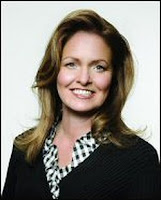 While spending a rainy afternoon at a friend’s house more than thirty years ago, Laura Bradford (a.k.a. Elizabeth Lynn Casey) fell in love with writing over a stack of blank paper, a box of crayons, and a freshly sharpened number two pencil. From that moment forward, she never wanted to do anything else.

Today, Laura is the national bestselling author of the Amish Mysteries, the Jenkins & Burns Mysteries, and the Southern Sewing Circle Mysteries (written as Elizabeth Lynn Casey). A new cozy mystery series will be added to the mix in 2016 with the release of The Emergency Dessert Squad Mysteries. Laura is a former Agatha nominee and the recipient of an RT Reviewer’s Choice Award in romance. In her free time, Laura enjoys making memories with her family, traveling, baking, and visiting the sea lions at the Central Park Zoo.