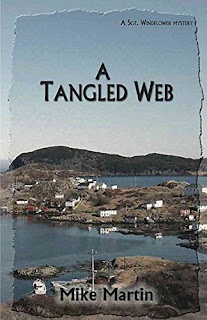 Life is good for Sgt. Windflower in Grand Bank, Newfoundland. But something’s missing from the Mountie’s life. Actually, a lot of things go missing, including a little girl and supplies from the new factory.

It’s Windflower’s job to unravel the tangled web of murder, deceit and an accidental kidnapping that threatens to engulf this sleepy little town and destroy those closest to him. But there’s always good food, good friends and the love of a great woman to make everything better in the end.

I liked that A Tangled Web isn’t your ordinary murder mystery and I enjoyed it very much. This is more of a traditional mystery or police procedural, rather than a cozy mystery. The story is well crafted, atmospheric, and the characters easy to keep up with. I appreciated that any violence takes place off screen and the writing is clean. It’s an easy read that held my attention and left me wanting more stories in this series.

Set in the small community of Grand Bank, Newfoundland, A Tangled Web involves the RCMP detachment located there and its leader, Sergeant Winston Windflower. The writing is different from a lot of books, in that the dialogue seems a little stiff at times and there isn’t a lot of character depth, emotion or descriptive language, but it works here. This story stands alone, but I would probably have a better sense of the characters had I read the previous five books, which I am eager to do.

Winston Windflower, from the Cree community of Northern Alberta, is a character that I was immediately drawn to. He’s a caring husband and soon-to-be father, loyal friend, believer in things spiritual, and an easygoing crime solver who gets the job done. It only took one Tony Hillerman novel for me to be drawn to stories involving the Indian culture, and Mike Martin quite vividly conveys that aspect. The spiritual traditions were especially fascinating, such as dream weaving, explained by Winston’s aunt … “Dreams tell us about our past, what has already happened. They also point to actions we should take if we want to get the right result in the future and to the signs all around us that we need to follow.”

It was fun to see Mike Martin do a little “name dropping” when he mentions two mystery authors that I greatly enjoy and highly recommend, Louise Penny and Donna Leon.

A Tangled Web ends with Winston and his wife making plans to open a B&B, with Winston transitioning gradually from his RCMP post as he becomes a dad. While this sounds like good storytelling opportunities, it was the RCMP (and setting) that initially drew me to this story, so I hope he continues in this field through many more books.

Mike Martin was born in Newfoundland on the East Coast of Canada and now lives and works in Ottawa, Ontario. He is a longtime freelance writer and his articles and essays have appeared in newspapers, magazines and online across Canada as well as in the United States and New Zealand. He is the author of Change the Things You Can: Dealing with Difficult People and has written a number of short stories that have published in various publications including Canadian Stories and Downhome magazine.

The Walker on the Cape was his first full fiction book and the premiere of the Sgt. Windflower Mystery Series. Other books in the series include The Body on the T, Beneath the Surface, A Twist of Fortune and A Long Ways from Home.

A Long Ways from Home was shortlisted for the 2017 Bony Blithe Light Mystery Award as the best light mystery of the year. A Tangled Web is the newest book in the series.

BE SURE to leave your name and your email address in a safe format - [at] and [dot] - for the drawing. E-mail required for entry. Contest ends at midnight PST on Thursday, December 7. Winner will be chosen by random.org and contacted by e-mail.