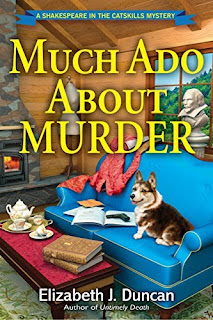 Much Ado About Murder
By Elizabeth J. Duncan
A Shakespeare in the Catskills Mystery #3
Crooked Lane Books, 2017

Costume designer Charlotte Fairfax has another murder on her hands as she prepares for the latest performance of the Catskills Shakespeare Theater Company, Much Ado About Nothing. The company’s steady growth enables them to cast star British actress Audrey Ashley, who arrives on scene to play the lead role of Beatrice. But things immediately get more complicated when Audrey insists the company replace the current director with new, up and coming British director Edmund Albright.

Edmund plans to change the popular romantic comedy, which alienates several people associated with the production. And the list of people he upsets only grows: the laid off former director, the hotel owner’s secretary, and even Audrey herself. Just as Edmund’s plans are about to come to fruition, his body is discovered on his sofa, holding a gun in his hand. His death is quickly ruled a suicide, but Charlotte thinks otherwise. Why would Edmund, on the brink of greatness, kill himself? And in such an American way?

With a whole cast of characters to investigate, Charlotte is determined to unmask each one before it’s final curtain call on the whole production in award-winning author Elizabeth J. Duncan’s third Shakespeare in the Catskills mystery, Much Ado About Murder.

Having enjoyed one of Elizabeth J. Duncan’s mysteries from the Penny Brannigan series a few years ago – a series I highly recommend, by the way – I was eager to read Much Ado About Murder from her Shakespeare series. This is just an excellent story in every way. With solid writing, an atmospheric feel, and appealing characters, I was entertained way into the night.

You don’t have to be a Shakespeare fan or be familiar with Much Ado About Nothing to enjoy the story, because that describes me. It simply makes a great backdrop for an enjoyable murder mystery. Charlotte, originally from England, is a great leading character – intelligent, caring, and skilled at her job with the small theater company. Strong secondary characters add richness to the story, especially Charlotte’s wealthy friend, Paula, who I’d like to know more about.

I loved how action revolved around problems with the play’s directors – one quit, failing to return from a trip, followed by the star’s insistence on bringing in Edmund Albright from England, which didn’t work out too well either. Shakespeare’s plays are often modernized or put in different settings, so the idea of a post-Civil War setting for Much Ado About Nothing was intriguing.

The murder plot is well executed and I enjoyed trying to figure things out along with Charlotte. The story is clean; Charlotte and her police officer boyfriend live together, but there’s no graphic scenes.

I thoroughly enjoyed Much Ado About Murder and highly recommend it, as well as anything Elizabeth J. Duncan writes. 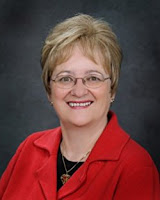 She is a two-time winner of the Bloody Words Award for Canada’s best light mystery and lives in Toronto.