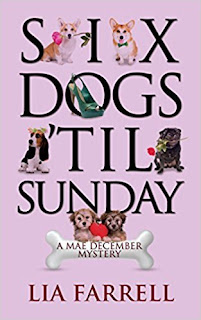 It’s January in Rosedale, Tennessee, and Mae December is preparing for her March wedding to Sheriff Ben Bradley. Mae, who boards dogs for a living, is also busy tending to her pregnant dog and scouting locations for the movie featuring the music of her former fiancé Noah West, who died in a car accident four years earlier. Fortunately, the picturesque old house at the end of Little Chapel Road is for rent.

Just as filming is about to begin, a man is shot on the set, but manages to drive himself to the hospital, where he dies before he can ID his killer. He was a member of the film crew, but also a local, and circumstances point to his being a confidential informant for Ben’s predecessor, Sheriff Trey Cantrell, also the owner of the house turned movie set. At the time of the shooting, the victim had been stealing a large sum of money from a safe on the premises. Whose money is it, and where does it come from?

The Rosedale Sheriff’s Office not only has another murder case on its hands, but one that will dredge up a past long buried. How far will the guilty parties go to protect their secrets?

Six Dogs ‘Til Sunday brings the excellent six-book Mae December mystery series to a close. I didn’t discover this series until the previous story, Five Dog Voodoo, but plan on starting from the beginning very soon. There’s an unusual complexity of plot and depth to these character-driven stories, making me wish the series could keep on going.

In this particular story, it’s not so much about trying to figure out who the culprit is, but rather enjoying the investigative process. Each chapter speaks from a different perspective –Mae December, Sheriff Ben Bradley, Suzanne December (Mae’s mom), and Chief Detective Wayne Nichols – and it all fits together beautifully. The rural Tennessee community Rosedale, just outside of Nashville, is vividly conveyed with southern charm.

The Mae December mysteries is one of the best series for character development that I’ve come across. It’s not about having a celebrity’s picture in mind; that’s not something I care for anyway. But I know the essence of the main characters, connect with them, and that’s what keeps me coming back. One of my favorites is Chief Detective Wayne Nichols, who has a Native American ancestry … “Coming from a culture that relied on acute visual skills had given him a near eidetic memory for scenes.” I particularly enjoyed the way his storyline developed in this story. Readers will also enjoy how Ben and Mae’s story concludes the series.

The Lia Farrell mother/daughter writing team is very talented and I hope they begin another mystery series soon.

Please click on the title to see my review of the previous book, Five Dog Voodoo


Lia Farrell is the nom de plume for a mother/daughter duo of writers. Mom Lyn Farquhar and Daughter Lisa Fitzsimmons have been collaborating on the Mae December mystery series for four years.

Lyn Farquhar taught herself to read before starting school and honed her storytelling abilities by reading to her little sister. Ultimately, her mother ended the reading sessions because Lyn’s sister decided she preferred being read to over learning to read herself. She fell in love with library books at the age of six when a Bookmobile came to her one-room rural elementary school. The day the Bookmobile arrived, Lyn decided she would rather live in the bookmobile than at home and was only ousted following sustained efforts by her teacher and the bookmobile driver.
Lyn graduated from Okemos High School in Michigan and got her college and graduate degrees from Michigan State University. She has a master’s degree in English literature and a Ph.D. in Education, but has always maintained that she remained a student for such a long time only because it gave her an excuse to read. Lyn holds the rank of Professor of Medical Education at Michigan State University and has authored many journal articles, abstracts and research grants. Since her retirement from MSU to become a full-time writer, she has completed a Young Adult Fantasy trilogy called Tales of the Skygrass Kingdom. Volume I from the trilogy is entitled Journey to Maidenstone and is available on amazon.com. Lyn has two daughters and six stepchildren, nine granddaughters and three grandsons. She also has two extremely spoiled Welsh Corgi’s. Her hobby is interior design and she claims she has the equivalent of a master’s degree from watching way too many decorating shows.

Lisa Fitzsimmons grew up in Michigan and was always encouraged to read, write and express herself artistically. She was read aloud to frequently. Throughout her childhood and teenage years, she was seldom seen without a book in hand. After becoming a mom at a young age, she attended Michigan State University in a tri-emphasis program with concentrations in Fine Art, Art History an Interior Design.
Lisa, with her husband and their two children, moved to North Carolina for three exciting years and then on to Tennessee, which she now calls home. She has enjoyed an eighteen-year career as a Muralist and Interior Designer in middle Tennessee but has always been interested in writing. Almost five years ago, Lisa and her mom, Lyn, began working on a writing project inspired by local events. The Mae December Mystery series was born.
Lisa, her husband, and their three dogs currently divide their time between beautiful Northern Michigan in the summertime and middle Tennessee the rest of the year. She and her husband feel very blessed that their “empty nest” in Tennessee is just a short distance from their oldest, who has a beautiful family of her own. Their youngest child has settled in Northern Michigan, close to their cabin there. Life is good.

When entering the drawing for an e-copy of Six Dogs ‘til Sunday, please help by clicking on this link and sharing my Facebook post, then leave a comment here letting me know that you shared. Thank you!