Review (+ Tour GIVEAWAY): Shot in the Dark by Cleo Coyle 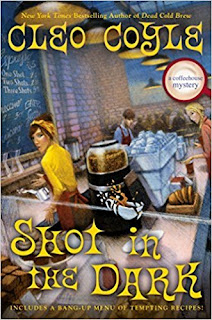 Shot in the Dark
By Cleo Coyle
A Coffeehouse Mystery #17
Berkley Prime Crime, 2018

A new smartphone dating game turns the Village Blend into a hookup hot spot, until one dark night, when a gunshot leaves a dead body behind and the landmark coffeehouse becomes the center of a whole new scene–a crime scene.

As Village Blend manager Clare Cosi attempts to finalize a date for her wedding, her ex-husband becomes addicted to making dates through smartphone swipes. Clare has mixed feelings about these quickie matchups happening in her coffeehouse. Even her octogenarian employer is selecting suitors by screenshot! But business is booming, and Clare works hard to keep the espresso shots flowing. Then one dark night, another kind of shot leaves a dead body for her to find.

The corpse is a successful entrepreneur who became notorious for his “hit it and quit it” behavior: prowling for women on dating apps, then devastating his conquests with morning-after insults. Though the NYPD quickly arrests one of his recent victims, Clare finds reason to believe she’s been framed.

Now, with the help of her ex and crew of quirky baristas, Clare starts “swiping” through suspects in her own shop, determined to find the real killer before another shot rings out.


“This phone app culture with its swipe-to-meet ethos,
I must admit, is seductive. There’s someone out there who’s perfect
for you. Someone who will finally complete you, make you happy.
You simply have to keep swiping, keep shopping.”
- Madame

Shot in the Dark is another excellent story in Cleo Coyle’s popular coffeehouse series, one that I thoroughly enjoyed. It was great to reunite with Claire and supporting characters – such as fiancé NYPD detective Mike, the gritty and wise Madame, the irritatingly adorable ex-husband Matt, and the Village Blend’s baristas. Shot in the Dark is a well-crafted, intelligently-written story, with complexity and depth.

The story’s social media theme makes it very relevant for today – and a little scary, to be honest. Swiping through a dating app and quickly connecting at a hot spot like the Village Blend just doesn’t seem promising for successful relationships, and Claire’s former mother-in-law didn’t think so either. I loved her comment to Claire, “Sooner or later they’ll understand that shared experiences over time are what create true intimacy and steadfast love.”

There’s delightful touches of humor in the midst of this serious story of murder, drugs and greed, one of my favorites being the character of the octogenarian Madame, who Claire cared deeply for. For me, the murder mystery itself was one of enjoying the unfolding of layers rather than trying to figure out “whodunit” – and it all leads to a spine-tingling finale.

Some story titles are cute, while others are creative, and I thought Shot in the Dark was pure genius in its subtle meanings. After all, it could simply be referring to coffee, or perhaps an actual murder, or maybe even the likelihood of finding the ideal mate through this crazy form of digital dating. I’ll end with another quote from Madame that beautifully reflects the story overall … “Throwing off societal constraints amounts to nothing if it produces nothing; and a life of aimlessness is far from a triumph of the human spirit.”

Note: This is a general market book, so readers can expect a little mild profanity and some suggestive scenes, but nothing too revealing. 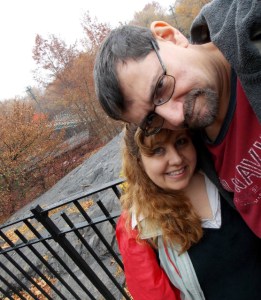 CLEO COYLE is the pseudonym for Alice Alfonsi, writing in collaboration with her husband, Marc Cerasini.

CLEO COYLE grew up in a small town near Pittsburgh, Pennsylvania. After earning scholarships to study writing at Carnegie Mellon and American Universities, she began her career as a cub reporter for The New York Times. Now an author of popular fiction and New York Times bestselling media tie-in writer, Cleo lives and works in New York City, where she collaborates with her husband (also a bestselling author) to pen the Coffeehouse Mysteries for Penguin. Together Cleo and her husband also write the Haunted Bookshop Mysteries under the name Alice Kimberly.

When not haunting coffeehouses, hunting ghosts, or rescuing stray cats, Cleo and Marc are bestselling media tie-in writers who have penned properties for NBC, Lucasfilm, Disney, Fox, Imagine, and MGM. In their spare time, they cook like crazy and drink a lot of java.